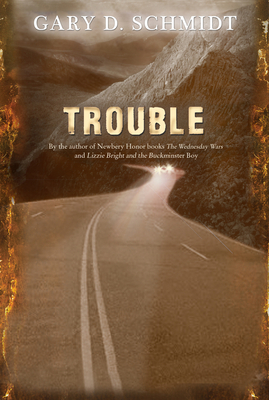 “Henry Smith’s father told him that if you build your house far enough away from Trouble, then Trouble will never find you.”

But Trouble comes careening down the road one night in the form of a pickup truck that strikes Henry’s older brother, Franklin. In the truck is Chay Chouan, a young Cambodian from Franklin’s preparatory school, and the accident sparks racial tensions in the school—and in the well-established town where Henry’s family has lived for generations. Caught between anger and grief, Henry sets out to do the only thing he can think of: climb Mt. Katahdin, the highest mountain in Maine, which he and Franklin were going to climb together. Along with Black Dog, whom Henry has rescued from drowning, and a friend, Henry leaves without his parents’ knowledge. The journey, both exhilarating and dangerous, turns into an odyssey of discovery about himself, his older sister, Louisa, his ancestry, and why one can never escape from Trouble.

Gary D. Schmidt is the best-selling author of many books for young readers, including Just Like That; National Book Award finalist Okay for Now; Pay Attention, Carter Jones; Orbiting Jupiter; the Newbery Honor and Printz Honor Book Lizzie Bright and the Buckminster Boy; and the Newbery Honor Book The Wednesday Wars. He is a professor of English at Calvin University in Grand Rapids, Michigan.

"Nothing is at it seems when Trouble arrives in varied and symbolic ways for two families and two communities. Franklin Smith, the arrogant scion of an aristocratic New England family, is accidentally struck while running and subsequently dies. The blame is accepted by a classmate, a Cambodian immigrant from a nearby town. When legal technicalities prevent Chay Chouan from being jailed, the perceived miscarriage of justice reverberates through idyllic Blythbury-by-the-Sea. Franklin's younger brother, Henry, becomes determined to climb Mount Katahdin, a feat that Franklin had coldly suggested might prove Henry had guts. Henry sets out hitchhiking for the mountain with best friend question. Somewhat improbably they are picked up by Chay, who has been expelled by his father and is now driving the truck that killed Franklin. Their symbolic journey predictably includes moments of danger, self-discovery, and reconciliation, fortunately leavened by the humorously ironic Sanborn. Complex structure allows revelations into the character of Chay, child of a violent refugee camp, unwanted product of rape, lover of poetry, and protector of Henry's sister (in a Romeo-and-Juliet twist). Teeming with plot elements, some of which may seem too purposeful, and richly veined with social and psychological crosscurrents, this story may be seen as allegorical in its intent and representation. Nevertheless it contains Schmidt's eloquent language and compelling characters, as well as compassionate examinations of the passage from childhood to adulthood and of the patters of common experience and mark and unite us as humans."--School Library Journal, starred review

"Henry and his family live the charmed existence of the well-bred, well-heeled New England old-money crowd, exemplified by successful, professional parents, a coastal home that has been in the family for hundreds of years, and bright, athletic children attending posh private academies and always rising to the challenges expected of them. That world shatters when Franklin, Henry's elder brother and role model, is hit by a truck belonging to Chay Chouan, the son of a Cambodian refugee, leaving Franklin with only one arm and indeterminate brain activity. Flurries of violence erupt as Franklin's fellow lacrosse players vent their rage on the Cambodian community, and Henry begins to question whether Franklin was such a good role model after all, given as he was to racially motivated bullying even before the accident. Henry decides that he needs to follow through on a plan that Franklin used to taunt him with, climbing a dangerous mountain as a rite of passage into Franklin's kind of macho manhood. Henry's version of the plan, though, leads to forgiveness as he hitches a ride with Chay of all people, and he learns secrets about his brother, his sister, and Chay that lead him to quesion the kind of person he wants to be. Schmidt creates a rich and credible world peopled with fully developed characters who have a lot of complex reasoning to do, reckoning that involves confronting issues of white privilege and responsibility for racial reconciliation and acceptance. In the midst of the drama, a hurricane uncovers a burned-out slave ship that belonged to Henry's ancestor; its presence, along with an encounter with some Vietnam vets, ups the ante on the white guilt message just in case you weren't paying attention, and thus seems a bit gratuitous. Schmidt's prose, however, is flawless, and Henry's odyssey of growth and understanding is pitch-perfect and deeply satisfying."--Bulletin of the Center for Children's Books

" 'If you build your house far enough from Trouble, then Trouble will never find you.' Such is the credo of the fortunate Smith family of Blythbury-by-the-Sea, a (fictional) WASP-y outpost of Boston. But when Trouble arrives, it just keeps on coming. First, oldest son Franklin lies in a coma after being hit by a car; a young Cambodia —