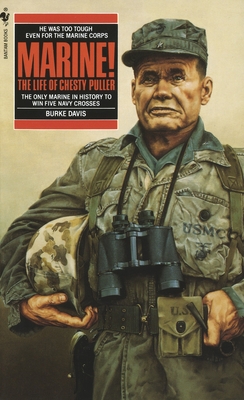 
Email or call for price.
He was too tough even for the Marine Corps

Chesty Puller enlisted in the Marine Corps in 1918 at the age of 20. He chased bandits in Haiti and Nicaragua, commanded the Horse Marines in Peking, battled his way from island to bloody island in the Pacific, led the landing at Inchon, and fought the most savage rearguard action of the Korean War. He became a legend in his own time, yet was forced into early retirement with the rank of lieutenant general. Why? No officer every inspired greater courage, loyalty, and devotion from his men, pushed them harder or served them better. But this popularity added to his blunt honesty earned him many enemies in Washington, and when the war was done they no longer needed a fighter like Chesty.

Here is the explosive true story of the most courageous and controversial commander of them all—the fabulous tale of a real-life hero.
Burke Davis (1913–2006) was an American author and journalist best known for his narrative histories of the Civil War, including To Appomattox: Nine April Days, 1865; Sherman’s March; and The Last Surrender. His acclaimed biographies of military and political figures include They Called Him Stonewall; Gray Fox: Robert E. Lee and the Civil War; Marine!: The Life of Chesty Puller; and Old Hickory: A Life of Andrew Jackson. A longtime special projects writer for Colonial Williamsburg, Davis also published many works of historical nonfiction for young readers. His numerous honors include the Mayflower Cup, the North Carolina Award for Literature, and election to the North Carolina Journalism Hall of Fame and the North Carolina Literary Hall of Fame.