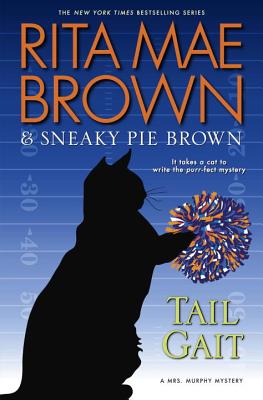 This is book number 24 in the Mrs. Murphy series.

There's nothing like a tail well told. Rita Mae Brown and her feline co-author Sneaky Pie Brown return with an all-new mystery featuring Mary Minor Harry Haristeen, crime-solving cats Mrs. Murphy and Pewter, and ever-faithful Tee Tucker the corgi.
TAIL GAIT
Spring has sprung in Crozet, Virginia a time for old friends to gather and bid farewell to the doldrums of winter. Harry and her husband, Fair, are enjoying a cozy dinner with some of the town's leading citizens, including beloved University of Virginia history professor Greg Ginger McConnell and several members of UVA's celebrated 1959 football team. But beneath the cloak of conviviality lurks a sinister specter from the distant past that threatens to put all their lives in jeopardy.
When Professor McConnell is found murdered on the golf course the next day gunned down in broad daylight by an unseen killer no one can fathom a motive, let alone find a suspect. Just as Harry and her furry cohorts begin nosing into the case, however, a homeless UVA alum confesses to the crime. Trouble is, no one believes that the besotted former All-American could have done the foul deed especially after Mrs. Murphy, Pewter, and Tucker make another gruesome discovery.
As the questions surrounding Ginger's death pile up, Harry's search for answers takes her down the fascinating byways of Virginia's Revolutionary past. The professor was something of a sleuth himself, it seems, and the centuries-old mystery he was unraveling may well have put a target on his back. As Harry edges closer to identifying an elusive killer, her animal companions sense danger and rally to find a way to keep Harry from disappearing into history.
Praise for the Mrs. Murphy mysteries
As feline collaborators go, you couldn t ask for better than Sneaky Pie Brown. " The New York Times Book Review
"
Mrs. Murphy mysteries are fun, sweet, and beautifully adventurous. "Bustle"
Brown is] the queen of the talking animal cozy. "Publishers Weekly.

Rita Mae Brown is the bestselling author of the Sneaky Pie Brown series; the Sister Jane series; the Runnymede books, including "Six of One "and" Cakewalk;" "A Nose for Justice "and" Murder Unleashed; Rubyfruit Jungle; "and" In Her Day; "as well as several other novels. An Emmy-nominated screenwriter and a poet, Brown lives in Afton, Virginia.

Sneaky Pie Brown, a tiger cat born somewhere in Albemarle County, Virginia, was discovered by Rita Mae Brown at her local SPCA. They have collaborated on numerous Mrs. Murphy mysteries in addition to "Sneaky Pie s Cookbook for Mystery Lovers" and "Sneaky Pie for President.""