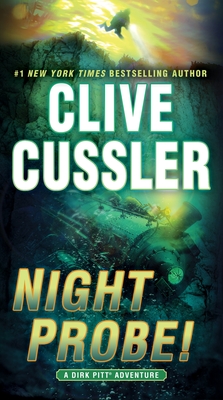 This is book number 5 in the Dirk Pitt Adventure series.

In the midst of an international crisis, Heidi Milligan, a beautiful, brilliant American naval commander, accidentally discovers an obscure reference to the long-buried North American Treaty, a precedent-shattering secret pact between the United States and Great Britain. The President believes that the treaty offers the single shot at salvation for an energy-starved, economically devastated nation, but the only two copies plummeted into the watery depths of the Atlantic in twin disasters long ago. The original document must be found—and the one American who can do the job is Dirk Pitt.

But in London, a daring counterplot is being orchestrated to see that the treaty is never implemented. Brian Shaw, a master spy who has often worked hand in hand with American agents, now confronts his most challenging command. Pitt’s mission: Raise the North American Treaty. Shaw’s mission: Stop Pitt.

Praise for Night Probe! and the Dirk Pitt® novels

Clive Cussler is the author or co-author of more than fifty previous books in five bestselling series: Dirk Pitt,® NUMA® Files, Oregon Files, Isaac Bell, and Fargo. His most recent New York Times bestselling novels are The Bootlegger, Ghost Ship, and The Eye of Heaven. His nonfiction works include Built for Adventure: The Classic Automobiles of Clive Cussler and Dirk Pitt, as well as The Sea Hunters and The Sea Hunters II; these describe the true adventures of the real NUMA, which, led by Cussler, searches for lost ships of historic significance. With his crew of volunteers, Cussler has discovered more than sixty ships, including the long-lost Confederate submarine Hunley. He lives in Arizona.

Praise for Night Probe! and the Dirk Pitt® novels