The Smell of Other People's Houses (Paperback) 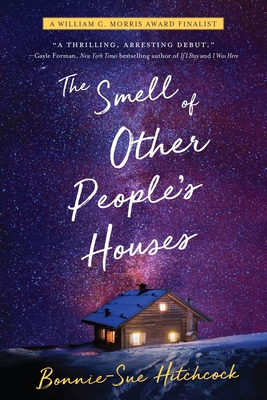 The Smell of Other People's Houses (Paperback)

“Bonnie-Sue Hitchcock’s Alaska is beautiful and wholly unfamiliar…. A thrilling, arresting debut.” —Gayle Forman, New York Times bestselling author of If I Stay and I Was Here

“[A] singular debut. . . .  [Hitchcock] weav[es] the alternating voices of four young people into a seamless and continually surprising story of risk, love, redemption, catastrophe, and sacrifice.” —The Wall Street Journal

This deeply moving and authentic debut set in 1970s Alaska is for fans of Rainbow Rowell, Louise Erdrich, Sherman Alexie, and Benjamin Alire Saenz. Intertwining stories of love, tragedy, wild luck, and salvation on the edge of America’s Last Frontier introduce a writer of rare talent.

Ruth has a secret that she can’t hide forever. Dora wonders if she can ever truly escape where she comes from, even when good luck strikes. Alyce is trying to reconcile her desire to dance, with the life she’s always known on her family’s fishing boat. Hank and his brothers decide it’s safer to run away than to stay home—until one of them ends up in terrible danger.

Four very different lives are about to become entangled. This unforgettable William C. Morris Award finalist is about people who try to save each other—and how sometimes, when they least expect it, they succeed.

“Hitchcock’s debut resonates with the timeless quality of a classic. This is a fascinating character study—a poetic interweaving of rural isolation and coming-of-age.” —John Corey Whaley, award-winning author of Where Things Come Back and Highly Illogical Behavior

“As an Alaskan herself, Bonnie Sue Hitchcock is able to bring alive this town, and this group of poor teens and their families that live there.” —Bustle

Bonnie-Sue Hitchcock was born and raised in Alaska. She worked many years fishing commercially with her family and as a reporter for Alaska Public Radio stations around the state. She was also the host and producer of “Independent Native News,” a daily newscast produced in Fairbanks, focusing on Alaska Natives, American Indians, and Canada’s First Nations. Her writing is inspired by her family’s four generations in Alaska.
A William C. Morris Award Finalist
A New York Public Library Best Book for Teens, 2016

“An exquisitely drawn, deeply heartfelt look at a time and place not often addressed. Hitchcock’s measured prose casts a gorgeous, almost otherworldly feel over the text, resulting in a quietly lovely look at the various sides of human nature and growing up in a difficult world.” —Booklist, Starred

"Using alternating narratives, debut novelist Hitchcock deftly weaves these stories together, setting them against the backdrop of a native Alaska that readers will find intoxicating. . . . will resonate with readers of all ages." —Publishers Weekly

“A multifaceted glimpse into [a] rich cast of characters. . . . An excellent debut.” —SLJ

“The Alaskan author depicts places and an era rarely seen in fiction for teens….All benefit from her journalist’s eye for detail.” —Kirkus Reviews

“An honest, gritty, and moving portrait of growing up in Alaska. Only someone who knows and loves this place through and through could tell this story. This book is Alaska.” —Eowyn Ivey, author of the New York Times bestseller The Snow Child

“As only a native of Alaska can, Bonnie-Sue Hitchcock blends narratives of indigenous and non- into a buffet of pain and beauty. Highly recommended.” —Tim Tingle, author of the series How I Became a Ghost