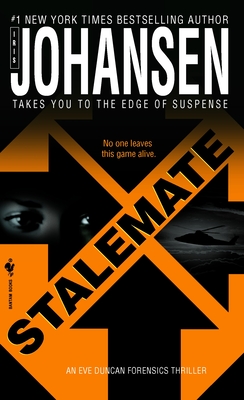 This is book number 7 in the Eve Duncan series.

The suspense begins with a phone call and leads forensic sculptor Eve Duncan onto the harrowing trail of a killer that even the most cold-blooded killers fear to face.

No one leaves this game alive

Her skill in identifying murder victims was worldrenowned, but Eve Duncan worked only for law enforcement and the families of innocent victims. The man on the other end of the phone was anything but law-abiding or innocent. She’d already turned down his offer twice, but the third time it comes with a grisly warning. Forced to accept, Eve will leave everything and everyone she loves to travel alone to the luxurious armed compound of one of the world’s most wanted criminals to identify a skull he’s recovered. She’s agreed to this devil’s bargain to save an innocent family, but also for a reason she can’t admit to the police, to the CIA, to anyone. For the man in the Colombian jungle promises Eve what she wants most of all—the key to solving the most painful mystery of her past.
Iris Johansen is the New York Times bestselling author of many novels, including Killer Dreams, On the Run, Countdown, Firestorm, Fatal Tide, Dead Aim, and No One to Trust. She lives near Atlanta, Georgia.