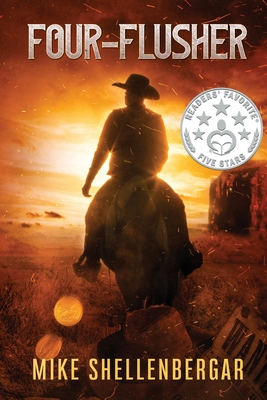 Four-Flusher by James M Shellenbergar is the story of a man on a mission to find the person who killed his sister. Elijah Pike is famous in the West. The stories about him are legendary and how this bounty hunter can hold his own in a fight. Pike has his reasons for becoming a bounty hunter though. He begins his journey as a form of revenge. He needs to find the person who killed his sister Laura. However, the search for his sister's killer ignites a fire in him and before he knows it, he is stuck in a web of lies and deceit. He becomes a bounty hunter and learns that the bad guys are not just the men looting the bars and causing chaos.

I love the way James M Shellenbergar depicts the wild west. Reading Refuge was a whole experience. I am so happy that this author does not disappoint and further raised my expectations with Four-Flusher. Pike is a mysterious man who calculates everything before he takes action. He is a man of few words, but when he does speak, he oozes charm and intelligence. Pike displays the hallmark of the author's brilliant protagonists. He is intuitive, sharp, and unafraid to face challenges head-on. As always, the suspense and action are strong enough to have me sitting on the edge of my seat and holding my breath. The story develops at a pace fast enough to keep the reader entertained while the narrative flows smoothly to keep the reader's interest. Pike's arc is intense yet so fitting for his journey. This is a must-read story

﻿Four-Flusher is a work of fiction in the western, action, and thriller sub-genres, and was penned by author Mike Shellenbergar. The opening to a new series of novels set in the wild west, this atmospheric and action-packed work follows protagonist Elijah Pike. Elijah is pained by the tragic loss of his sister, so when he discovers that he has a chance to hunt down the killer who ended her life, he launches himself into a new world of a bounty hunter and hardened revenge. So begins his journey of thrills, dangerous moments, and emotional trials as he takes on the west, one bad guy at a time.

Author Mike Shellenbergar delivers a fantastic novel that captures both the classic spirit of the western film and book genre but also updates the craft for a modern audience by bringing in some real blockbuster action and gritty realism. I enjoyed Elijah Pike as a central character very much, and although this is a revenge story, his emotional qualities are deeper than that and we see him grow and change a great deal through the challenges of the novel. As the plot rolls on, we become more and more invested in his story and his survival, which makes for some real edge-of-your-seat moments as Shellenbergar ramps up the danger levels with every chapter. Overall, I would highly recommend Four-Flusher to fans of the western genre, but also to those readers who like high-octane action stories and gritty heroes and are maybe looking to try a western tale for the very first time.