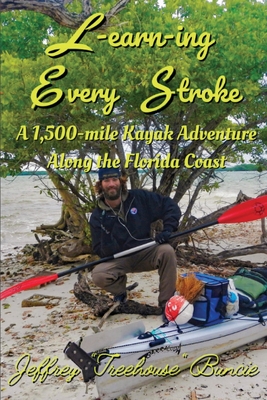 ﻿Leaving the classroom behind, an enthusiastic middle school teacher embarked upon a solo paddle circumnavigating the Florida peninsula -- 1,500 miles of the romanticized Florida coastline called to his adventurous spirit. From the moment he sat in his kayak at the Florabama border, the comforts of the societal world were left behind. Immersed in a world that is often forgotten, the journey along the Florida coastal habitats lead him through a progression of internal conflicts and acceptance. Overcoming adversity from strange animal encounters, unforgiving weather and sometimes poor decision making became a constant battle. By remaining teachable and possessing the willingness to press on, Jeffrey "Treehouse" Buncie would spend five months off the coast of Florida, earning his way to becoming the 15th thru paddler of the Florida Circumnavigational Saltwater Paddling Trail.

Follow alongside as the author paddles the Florida coastline with over 50 detailed color maps. These hand drawn maps were created so you as the reader could envision his very own waypoints and campsites through each segment of the journey. Wrapping the titled sections up in a bow, included is over 100 color photos as he made his way from the Florabama border, around the southern tip of the Keys and back up the Atlantic to Georgia.