Wrath of Poseidon (A Sam and Remi Fargo Adventure #12) (Paperback) 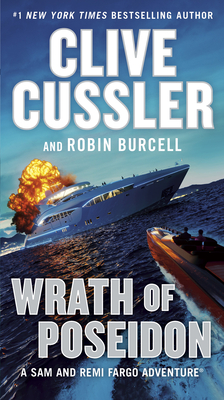 Clive Cussler was the author of more than seventy books in five bestselling series, including Dirk Pitt, NUMA Files, Oregon Files, Isaac Bell, and Sam and Remi Fargo. His life nearly paralleled that of his hero Dirk Pitt. Whether searching for lost aircraft or leading expeditions to find famous shipwrecks, he and his NUMA crew of volunteers discovered and surveyed more than seventy-five lost ships of historic significance, including the long-lost Confederate submarine Hunley, which was raised in 2000 with much publicity. Like Pitt, Cussler collected classic automobiles. His collection featured more than one hundred examples of custom coachwork. Cussler passed away in February 2020.

"An intriguing origin story...Readers will keep turning the pages to see what happens next."--Publishers Weekly

"It's time for the latest Sam and Remi Fargo adventure! It feels great to say this because it proves how authors have the ability to move us with their words and stories even after they are gone. Clive Cussler passed away earlier this year, but not without leaving a few books in the pipeline awaiting publication. ...Wrath of Poseidon is written in compact chapters ala James Patterson, as Cussler and Burcell end each one with some sort of cliffhanger or effective plot twist that keeps the pages turning...It seems that the late, great Clive Cussler infused Burcell with his swaggering, pirate-like spirit because the literary pairing works."--Bookreporter.com