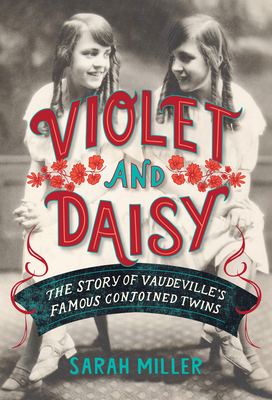 From the author of The Miracle & Tragedy of the Dionne Quintuplets and The Borden Murders comes the absorbing and compulsively readable story of Violet and Daisy Hilton, conjoined twins who were the sensation of the US sideshow circuits in the 1920s and 1930s.

On February 5, 1908, Kate Skinner, a 21-year-old unmarried barmaid in Brighton, England, gave birth to twin girls. They each had ten fingers and ten toes, but were joined back to back at the base of the spine. Freaks, monsters--that's what they were called. Mary Hilton, Kate's employer and midwife, adopted Violet and Daisy and promptly began displaying the babies as "Brighton's United Twins." Exhibitions at street fairs, carnivals, and wax museums across England and Scotland followed. At 8 years old, the girls came to the United States, eventually becoming the stars of sideshow, vaudeville, and burlesque circuits in the 1920s and 1930s. In a story loaded with questions about identity and exploitation, Sarah Miller delivers a completely compelling, empathetic portrait of two sisters whose bonds were so sacred that nothing — not even death— would compel Violet and Daisy to break them.

Praise for Violet and Daisy:

"Exploited stage darlings? Callous self-promoters? Sad vaudevillians with little to offer in the motion picture era? Miller wisely leaves readers to work out their own answers." –The Bulletin

Praise for The Miracle & Tragedy of the Dionne Quintuplets:

"Throughout, Miller avoids a sensational tone, and her fresh and detailed reconstruction of this famous story is riveting -- part tabloid story, part poignant biography." —The New York Times Book Review

"[A] thorough, fascinating deep dive into the lives of five girls who captured the attention of millions" —Booklist, Starred Review

"Miller demonstrates herself once again to be a dab hand at examining a historic media frenzy and analyzing the legacy of its lore, leaving trails of ill-informed opinion and blame that lingers into the present." —The Bulletin, Starred Review

"International media darlings during the Great Depression, the Dionne sisters are virtually unknown to today's young people, but Miller's intense focus on what the girls were going through makes their story timeless." —The Horn Book, Starred Review