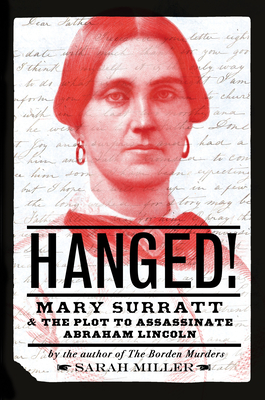 
Usually Ships in 1-5 Days
From the critically acclaimed author of The Borden Murders comes the thrilling story of Mary Surratt, the first woman to be executed by the US government, for her alleged involvement in the plot to assassinate Abraham Lincoln.

A dubious distinction belongs to Mary Surratt: on July 7, 1865, she became the first woman to be executed by the United States government, accused of conspiring in the plot to assassinate not only President Abraham Lincoln, but also the vice president, the secretary of state, and General Grant.

Mary Surratt was a widow, a Catholic, a businesswoman, a slave owner, a Union resident, and the mother of a Confederate Secret Service courier. As the proprietor of the boardinghouse where John Wilkes Booth and his allies are known to have gathered, Mary Surratt was widely believed, as President Andrew Johnson famously put it, to have “kept the nest that hatched the egg.” But did Mrs. Surratt truly commit treason by aiding and abetting Booth in his plot to murder the president? Or was she the victim of a spectacularly cruel coincidence? Here is YA nonfiction at its best--gripping, thought-provoking, and unputdownable.
SARAH MILLER is the author of Violet and Daisy, called "meticulously detailed" in a starred review from The Horn Book; The Miracle & Tragedy of the Dionne Quintuplets, which received four starred reviews; and The Borden Murders, a School Library Journal Best Book and an ALA-YALSA Quick Pick for Reluctant Readers. In addition to her work for young readers, she is the author of the USA Today bestselling Caroline: Little House, Revisited, which was named a Barnes & Noble Discover Great New Writers Selection, among other accolades. Visit her at sarahmillerbooks.com or on Facebook at @SarahMillerwritesbooks.
★ "[A] tour de force…. Miller both respects her subject and satisfies her audience's hunger for true crime, shares the quirks of interpreting source material, and uncovers the interplay of police corruption, politics, prisoners' rights, and sexism." —Booklist, starred review