The Human Cosmos: Civilization and the Stars (Paperback) 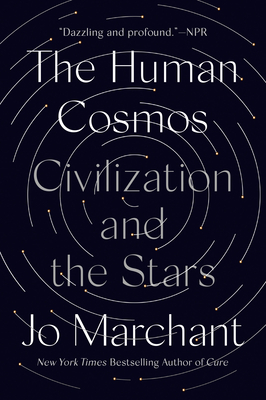 The Human Cosmos: Civilization and the Stars (Paperback)

A historically unprecedented disconnect between humanity and the heavens has opened. Jo Marchant's book can begin to heal it.

For at least 20,000 years, we have led not just an earthly existence but a cosmic one. Celestial cycles drove every aspect of our daily lives. Our innate relationship with the stars shaped who we are—our art, religious beliefs, social status, scientific advances, and even our biology. But over the last few centuries we have separated ourselves from the universe that surrounds us. It's a disconnect with a dire cost.

Our relationship to the stars and planets has moved from one of awe, wonder and superstition to one where technology is king—the cosmos is now explored through data on our screens, not by the naked eye observing the natural world. Indeed, in most countries, modern light pollution obscures much of the night sky from view. Jo Marchant's spellbinding parade of the ways different cultures celebrated the majesty and mysteries of the night sky is a journey to the most awe-inspiring view you can ever see: looking up on a clear dark night. That experience and the thoughts it has engendered have radically shaped human civilization across millennia. The cosmos is the source of our greatest creativity in art, in science, in life.

To show us how, Jo Marchant takes us to the Hall of the Bulls in the caves at Lascaux in France, and to the summer solstice at a 5,000-year-old tomb at Newgrange, Ireland. We discover Chumash cosmology and visit medieval monks grappling with the nature of time and Tahitian sailors navigating by the stars. We discover how light reveals the chemical composition of the sun, and we are with Einstein as he works out that space and time are one and the same. A four-billion-year-old meteor inspires a search for extraterrestrial life. The cosmically liberating, summary revelation is that star-gazing made us human.


Jo Marchant is an award-winning science journalist. She has a PhD in genetics and medical microbiology and an MSc in science communication. She has worked as an editor at New Scientist and Nature, and her articles have appeared in The Guardian, Wired, Observer, New Scientist, and Nature. Jo Marchant's previous book, Cure, hit the New York Times bestseller hardcover nonfiction and science lists and was sold in more than thirty countries. She is also the author of Decoding the Heavens, which, like Cure, was shortlisted for the Royal Society Prize for Science Books.
"With whirlwind curiosity and gripping storytelling, Marchant takes us on a trip through time and space, pointing out how our perceptions of the heavens have informed every step of our evolution as a civilization. Dazzling and profound, The Human Cosmos is a skyward gaze at the void we can never stop trying to fathom."
—NPR Book Concierge

“A deft writer...The Human Cosmos is a reminder that the forces that shape humanity far precede modern people and will persist long after we’re gone."
—The New York Times Book Review

“Marchant’s vast and fascinating story packs in plenty of human detail.. An inspiring and persuasive argument. If humanity is in the gutter, at least some of us could be looking at the stars.”
—The Guardian

“Marchant charts the history of humanity’s fascination with the night sky and explores the way the stars have shaped art, faith, science and society, and what our modern disconnect from the stars has cost us.”
—USA Today, “5 Books Not to Miss”

“Science journalist Marchant explores the relationship between humans and the celestial in this luminous and fascinating journey through science, religion, culture and everything in between.”
—Newsweek, “25 Must-Read Fall Fiction and Nonfiction Books to Escape the Chaos of 2020”

“A thought-provoking look at how human fascination with the night sky has influenced beliefs throughout history...Integrating science, history, philosophy and religion, Marchant’s epic account is one for readers to savor.”
—Publishers Weekly, starred review

“In a tour de force on par with Sapiens by Yuval Noah Harari (2015), Marchant argues that we need to experience the awe evoked by the unveiled night sky so that we, once again, feel profoundly connected to the cosmos and, more crucially, to earthly life, which is precious, vulnerable, and in our care.”
—Booklist, starred review

“The Human Cosmos invites us along for a journey, retelling the story of our wondrous relationship with what lies above us, and how its mysteries continue to captivate, and facilitate, the human imagination and catalyze our innovation.”
—Agustín Fuentes, professor of anthropology at the University of Notre Dame, author of The Creative Spark

“An important and delicious book. Jo Marchant—whipsmart, sensitive, and eloquent yet unforced as ever—mines the history of stargazing to show that today's cosmology can't reveal the 'intrinsic nature' of anything, whether stars, stardust, or human existence, because omitting human consciounsess from its equations impoverishes not just our comprehension of the universe, but the notion of understanding itself.”
—David Dobbs, author of Reef Madness

“Marchant lifts our gaze skyward and reawakens our awe for humanity at a time when we so desperately need it.”
—Amanda Mascarelli, managing editor of SAPIENS

"A dazzling cultural account of our enduring and ever-changing relationship to the cosmos. Beginning with cave paintings and stone circles, Marchant traces humanity’s epic journey from a sky filled with gods, spirits and celestial events that shaped people’s lives and beliefs to the Big Bang and the search for alien life. This book will change the way you look at the night sky."
—Manjit Kumar, author of Quantum

"The Human Cosmos is rich and deep but, most of all, great fun to read. Jo Marchant takes in the sweep of human history from our earliest cultural roots to the most recent science with insight and delight. Both the celestial sphere and the arc of human history come across clearly here, and the reader is informed, engaged, and enlightened throughout.”
—Dr. Pranab Das, professor of physics, Elon University

“A multifaceted meditation on humanity’s relationship with the cosmos.”
—Nature

" A tour of the heavens that centers not so much on outer space as what it does to our inner beings....Readers interested in the cognitive aspects of cosmology will enjoy Marchant’s explorations."
—Kirkus

"This thematic, engaging overview of our stars and skies has something for all readers of geography, exploration, religion, philosophy, and politics."
—Library Journal