Right Behind You (Paperback) 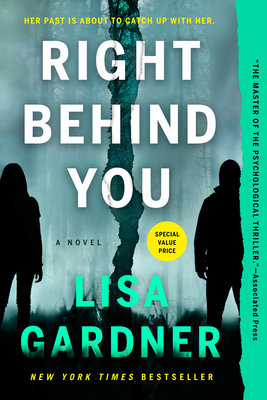 Another twisty bestselling thriller from Lisa Gardner featuring Pierce Quincy and Rainie Conner as they take on a case that hits far too close to home.

Eight years ago, Sharlah May Nash's older brother beat their drunken father to death with a baseball bat in order to save both of their lives. Now thirteen years old, Sharlah has finally moved on. About to be adopted by retired FBI profiler Pierce Quincy and his partner, Rainie Conner, Sharlah loves one thing best about her new family: They are all experts on monsters.

Then the call comes in. A double murder at a local gas station, followed by reports of an armed suspect shooting his way through the wilds of Oregon. As Quincy and Rainie race to assist, they are forced to confront mounting evidence: The shooter may very well be Sharlah's older brother, Telly Ray Nash, and it appears his killing spree has only just begun.

As the clock winds down on a massive hunt for Telly, Quincy and Rainie must answer two critical questions: Why after eight years has this young man started killing again? And what does this mean for Sharlah? Once upon a time, Sharlah's big brother saved her life. Now, she has two questions of her own: Is her brother a hero or a killer? And how much will it cost her new family before they learn the final, shattering truth? Because as Sharlah knows all too well, the biggest danger is the one standing right behind you.

Lisa Gardner is the #1 New York Times bestselling author of twenty novels, including Look for Me, Right Behind You, Find Her, Crash & Burn, Fear Nothing, Touch & Go, Catch Me, and The Neighbor, which won the International Thriller of the Year Award. She lives with her family in New England.

Praise for Right Behind You

“Gardner knows how to get the reader emotionally hooked into the story, and the police procedure elements of the novel shine....Gardner still knows how to surprise and tantalize. She's a master of the psychological thriller, so don't leave this one behind.”—Associated Press

“Right Behind You...solidifies [Lisa Gardner’s] claim as the queen of psychological suspense.”—Providence Journal

“The construction of Right Behind You is diabolically clever.”—Connecticut Post

“Lisa Gardner had us all on the edge of our seats with 2016’s Find Her, and now she's back to terrify us again.”—Bustle

“From the captivating first sentence to the shocking conclusion, this is addictive reading entertainment at its finest.”—Brit & Co

Praise for Lisa Gardner and Her Novels

“For years Lisa Gardner has been one of the best in the thriller business, but Find Her is something new: taut psychological suspense, an intricate mystery, emotionally devastating, ultimately empowering—a novel that should not be missed.”—Harlan Coben

“Lisa Gardner is the master of the psychological thriller....The world of the FBI, the terror of abduction and victim advocates blend into this tense...thriller.”—Associated Press

“You'll read Find Her for its adrenaline-charged plot. You'll remember it for its insights into trauma and forgiveness.”—Oprah.com

“A psychological thriller both chilling and emotional. Her narrative thrums with heart-pounding scenes and unexpected twists that have you furiously flipping pages.”—USA Today’s Happy Ever After

“The line between mysteries and thrillers and so-called literary fiction has always been a thin one, but contemporary writers like Lisa Gardner make that sort of arbitrary distinction seem especially foolish...Find Her...is a taut, brilliantly constructed look at the same sort of horrific situation that powered Emma Donoghue’s Room.”—Connecticut Post

“With labyrinthine twists and surprises on just about every turn of the page, Gardner has crafted a delight of a suspense novel.”—New York Journal of Books

“Her most intriguing and complex novel to date... Only an author as talented as Gardner could make the book so intensely satisfying.”—The Huffington Post