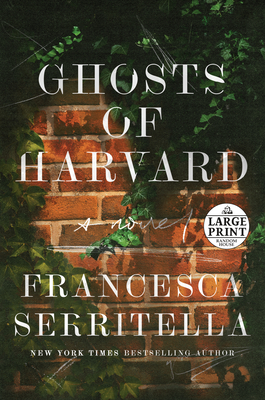 By Francesca Serritella
$29.00
Email or call for price.

“Blistering and bracing . . . well-wrought and chilling . . . Ghosts of Harvard presents a postmodern gothic tale wrapped in the fabric of a traditional thriller, with sterling results. A magnificent mix of the Henry James classic The Turn of the Screw with Donna Tartt’s The Secret History.”—The Providence Journal

“Ghosts of Harvard is worth the read for its conclusion alone, but there is more to draw from the story than its beautiful tale of self-discovery. It highlights the importance of controlling the controllables, and the real ability to shape the legacy we leave.”—The Harvard Crimson

“Hauntingly beautiful . . . An unexpected and entirely welcomed summer read . . . It’s dark, unpredictable, and every chapter draws you further and further into the story, each one more exciting than the next. . . . Ghosts of Harvard’s thrilling layers are entirely immersive. . . . From the very start of the novel, Serritella is unafraid to take on difficult topics. . . . She approaches these feelings, themes, and histories with care and nuance, careful to avoid stereotypes or stigmas.”—Teen Vogue

“A brisk, entertaining coming-of-age story . . . Serritella has a wonderful touch for her secondary characters. . . . Readers of campus mysteries will love this surprising and intricate bildungsroman.”—Publishers Weekly