Where Are the Constellations? (Where Is?) (Paperback) 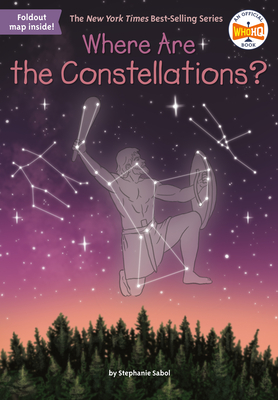 Where Are the Constellations? (Where Is?) (Paperback)

By Stephanie Sabol, Who HQ, Laurie A. Conley (Illustrator)


Usually Ships in 1-5 Days
Calling all stargazers, this addition to the New York Times bestselling series is sure to be the perfect book for you!

From the #1 New York Times Best-Selling Who Was? series comes Where Is?, a series that tells the stories of world-famous landmarks and natural wonders and features a fold-out map!

Ancient people from many different cultures--Greek, Roman, Mezo-American, Arab--all looked up and imagined pictures in the sky by "drawing" a line from one star to another, like a connect-the-dots puzzle. These star pictures--constellations--represented myths and legends from the various cultures that still fascinate us today.

Author of the tremendously popular Where Is Our Solar System? Stephanie Sabol relates many of the most popular constellation stories and explains what stars actually are: how they formed, why they die, and how they're grouped into constellation families.
Stephanie Sabol is the author of several Who HQ books, including Where Is Our Solar System? and What Was the Titanic? She currently resides in Hoboken, New Jersey.