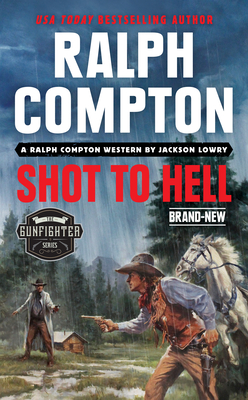 By Jackson Lowry, Ralph Compton
$7.99
Email or call for price.

A deadly marksman is on the hunt to find his missing sister in this exhilarating new Ralph Compton Western.

One terrible day, fifteen-year-old Leif Gunnarson comes home to find his family home on fire and a gruesome scene inside: his parents are tied up, on the brink of death among the hellish flames, and his sister is nowhere to be found. His father can barely gasp a name: Simkins. And with that, Leif has his life’s mission—to track down Luther Simkins, notorious outlaw and gang leader, and find his sister.

Along the way, Leif finds a temporary home in Wyoming Bob’s Wild West Show. He has an innate talent with firearms but needs to hone those skills until he can outshoot anyone, even Simkins. Touring the West as the star performer known as Trickshot, Leif finally gets wind of an outlaw who could lead him to his sister. It will be the most important showdown of his life—but will his sharpshooting be a match for the shocking tricks the outlaw has up his sleeve?

Ralph Compton stood six foot eight without his boots. He worked as a musician, a radio announcer, a songwriter, and a newspaper columnist. His first novel, The Goodnight Trail, was a finalist for the Western Writers of America Medicine Pipe Bearer Award for best debut novel. He was the USA Today bestselling author of the Trail of the Gunfighter series, the Border Empire series, the Sundown Riders series, and the Trail Drive series, among others.

Jackson Lowry is the Western pen name for Robert E. Vardeman, author of numerous novels. Vardeman received the 2017 Western Fictioneers Lifetime Achievement Award. Western titles include Sonora Noose, Great West Detective Agency, and the Western trilogy Punished. He was born in Texas and has lived in the wilds of New Mexico most of his life.