Anaximander: And the Birth of Science (Paperback) 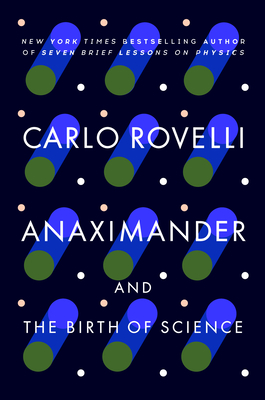 Anaximander: And the Birth of Science (Paperback)

Over two millennia ago, the prescient insights of Anaximander paved the way for cosmology, physics, geography, meteorology, and biology, setting in motion a new way of seeing the world. His legacy includes the revolutionary ideas that the Earth floats in a void, that animals evolved, that the world can be understood in natural rather than supernatural terms, and that universal laws govern all phenomena. He introduced a new mode of rational thinking with an openness to uncertainty and the progress of knowledge.

In this elegant work, the renowned theoretical physicist Carlo Rovelli brings to light the importance of Anaximander’s overlooked influence on modern science. He examines Anaximander not from the point of view of a historian or as an expert in Greek philosophy, but as a scientist interested in the deep nature of scientific thinking, which Rovelli locates in the critical and rebellious ability to reimagine the world again and again. Anaximander celebrates the radical lack of certainty that defines the scientific quest for knowledge.
Carlo Rovelli is a theoretical physicist who has made significant contributions to the physics of space and time. He has worked in Italy and the United States and currently directs the quantum gravity research group of the Centre de Physique Théorique in Marseille, France. His books, including Seven Brief Lessons on Physics, The Order of Time, and Helgoland, are international bestsellers that have been translated into more than fifty languages.
Praise for Anaximander:

“Solid insights into the foundations of science...as usual, Rovelli communicates his ideas with clarity and verve.” —Kirkus

“An insightful survey of the scientific contributions of Greek philosopher Anaximander…Rovelli makes the most of the available evidence in building his case that the philosopher’s emphasis on natural causes marked a sea change in human thought. This is a masterful overview of a pivotal figure in scientific history.” —Publisher's Weekly