How Hitler Could Have Won World War II: The Fatal Errors That Led to Nazi Defeat (Paperback) 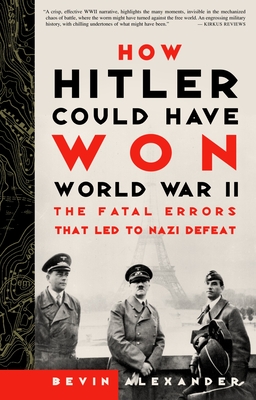 From an acclaimed military historian, a fascinating account of just how close the Allies were to losing World War II.

Most of us rally around the glory of the Allies' victory over the Nazis in World War II. The story is often told of how the good fight was won by an astonishing array of manpower and stunning tactics. However, what is often overlooked is how the intersection between Adolf Hitler's influential personality and his military strategy was critical in causing Germany to lose the war.

With an acute eye for detail and his use of clear prose, Bevin Alexander goes beyond counterfactual "What if?" history and explores for the first time just how close the Allies were to losing the war. Using beautifully detailed, newly designed maps, How Hitler Could Have Won World War II exquisitely illustrates the important battles and how certain key movements and mistakes by Germany were crucial in determining the war's outcome. Alexander's harrowing study shows how only minor tactical changes in Hitler's military approach could have changed the world we live in today.

Alexander probes deeply into the crucial intersection between Hitler's psyche and military strategy and how his paranoia fatally overwhelmed his acute political shrewdness to answer the most terrifying question: Just how close were the Nazis to victory?

Bevin Alexander is the author of five books of military history, including Lost Victories, which was named by the Civil War Book Review as one of the seventeen books that has most transformed Civil War scholarship. His battle studies of the Korean War, written during his decorated service as a combat historian, are stored at the National Archives in Washington, D.C. He lives in Bremo Bluff, Virginia.

"Bevin Alexander, an experienced military historian who writes with clarity and alarm, here presents a new and insightful interpretation of Hitler's lost opportunities to win World War II. In the process Alexander gives us a concise history of the war in Europe."
—Martin Blumenson, author of The Patton Papers and Patton: The Man Behind the Legend

"In his latest book, How Hitler Could Have Won World War II, author Bevin Alexander has synthesized and analyzed the military campaigns by Germany under Hitler's control in such a readable fashion as to intrigue both armchair generals as well as serious students of military strategy and tactics. It should be a required text for study at all military schools and war colleges."
—Thomas H. Moorer, Admiral, U.S. Navy (Ret.), former chairman, U.S. Joint chiefs of Staff

"Speculation is the handmaiden of a historian's search for a story of the past.... Bevin Alexander has compiled his 'What if?'s' into a fascinating, plausible and, in retrospect, alarming scenario of what might have been if only Hitler had been a bit more rational, a bit better at grand strategy."
—F. J. Kroesen, former commander-in-chief, U.S. Army-Europe, and commander, NATO Central Army Group