Spilled Milk: Based on a true story (Paperback) 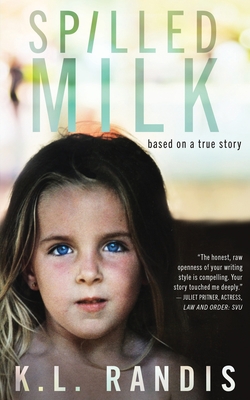 "Randis later would testify at a criminal trial against her father, who was sentenced to prison for his crimes of child abuse]. He was sentenced to up to 16 years in 2004. Her painful -- and ultimately triumphant -- story is recounted in Randis' first novel, "Spilled Milk."
-- Stacy, Brown, Pocono Record Newspaper "I read this book in two days, I couldn't put it down."
-- Chelsea Deboer, Teen Mom 2 "Kelly Randis will use] her first-hand experience as a sexual assault survivor to educate national leaders at the Pentagon."
-- LT Ashley Valanzola, Pentagon Sexual Assault Prevention Coordinator "The honest, raw openness of your writing style is compelling. Your story touched me deeply."
-- Juliet Pritner, Actress, Law And Order: SVU Brooke Nolan is a battered child who makes an anonymous phone call about the escalating brutality in her home. When social services jeopardize her safety, condemning her to keep her father's secret, it's a glass of spilled milk at the dinner table that forces her to speak about the cruelty she's been hiding. In her pursuit of safety and justice, Brooke battles a broken court system that pushes to keep her father in the home. Spilled Milk is a novel of shocking narrative, triumph and resiliency.

K.L. Randis, author of bestselling novel Spilled Milk and the Pillbillies series, started journaling at the age of six and had short stories and poetry published by the time she was thirteen. She is a graduate of Pennsylvania State University and a certified expert in the field of domestic violence. She has since written numerous local publications that brought awareness to domestic violence and child abuse. K.L. Randis engages audiences on a local and national level to raise awareness about child abuse, serving as a frequent commentator to media outlets. She has developed local high school presentations on teen dating violence, was named Community Woman of Distinction by East Stroudsburg University, and was invited to the Pentagon to speak to the department of defense about child abuse. Spilled Milk is her first novel, which grabbed the #1 bestsellers spot in the genre of Child Abuse on Amazon for eight consecutive months only 24 hours after its debut. She resides in the Pocono Mountains of Pennsylvania with her family. Contact the Author: spilledmilkrandis@yahoo.com