Nine Innings: The Anatomy of a Baseball Game (Paperback) 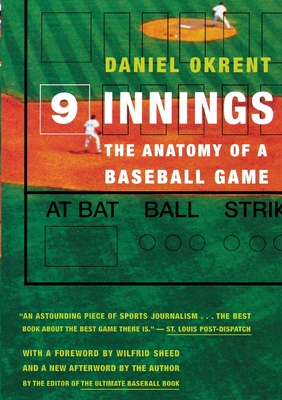 Nine Innings: The Anatomy of a Baseball Game (Paperback)

You'll never watch baseball the same way again. A timeless baseball classic and a must read for any fan worthy of the name, Nine Innings dissects a single baseball game played in June 1982 -- inning by inning, play by play. Daniel Okrent, a seasoned writer and lifelong fan, chose as his subject a Milwaukee Brewers&lt;endash&gt;Baltimore Orioles matchup, though it could have been any game, because, as Okrent reveals, the essence of baseball, no matter where or when it's played, has been and will always be the same. In this particular moment of baseball history you will discover myriad aspects of the sport that are crucial to its nature but so often invisible to the fans -- the hidden language of catchers' signals, the physiology of pitching, the balance sheet of a club owner, the gait of a player stepping up to the plate. With the purity of heart and unwavering attention to detail that characterize our national pastime, Okrent goes straight to the core of the world's greatest game. You'll never watch baseball the same way again.

Daniel Okrent is an editor-at-large at TIME, INC., and has published four books, including the best-selling BASEBALL ANECDOTES and NINE INNINGS: THE ANATOMY OF A BASEBALL GAME. The author resides in New York City.

"Informative and amusing . . . we get a little bit of everything and a lot of entertainment." - Christopher Lehmann-Haupt The New York Times

"An astounding piece of sports journalism . . . the best book about the best game there is." - ST LOUIS DISPATCH —