Lincoln's Melancholy: How Depression Challenged a President and Fueled His Greatness (Paperback) 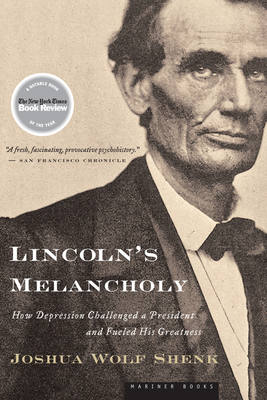 A thoughtful, nuanced portrait of Abraham Lincoln that finds his legendary political strengths rooted in his most personal struggles.

A New York Times Notable Book of the Year

Giving shape to the deep depression that pervaded the sixteenth president's adult life, Joshua Wolf Shenk's Lincoln's Melancholy reveals how this illness influenced both the president's character and his leadership.

Lincoln forged a hard path toward mental health from the time he was a young man. Shenk draws from historical record, interviews with Lincoln scholars, and contemporary research on depression to understand the nature of his unhappiness. In the process, he discovers that the President's coping strategies — among them, a rich sense of humor and a tendency toward quiet reflection — ultimately helped him to lead the nation through its greatest turmoil.

JOSHUA WOLF SHENK is a curator, essayist, and the author of Lincoln's Melancholy, a New York Times Notable Book. A contributor to The Atlantic, Harper's, The New Yorker, and other publications, he directs the Arts in Mind series on creativity and serves on the general council of The Moth. He lives in Los Angeles.

"Lincoln's Melancholy is an extraordinary story, for the depth of its scholarship and the lure of its style." --Mike Wallace, cohost of CBS's "60 Minutes"

"Lincoln not only coped with his depression, he harnessed it. Joshua Wolf Shenk [explains how] masterfully and memorably." --Walter Isaacson, president and CEO of the Aspen Institute and author of Benjamin Franklin: An American Life

"A profoundly human and psychologically important examination of the melancholy that so pervaded Lincoln's life....Remarkable." --Kay Redfield Jamison, Ph.D., Professor of Psychiatry, Johns Hopkins School of Medicine and author of An Unquiet Mind

"This is sensitive history, with important implications for the present." Publishers Weekly

"A significant contribution to the study of Lincoln and his battle with depression that will resonate with contemporary Americans. . .inspirational." Kirkus Reviews, Starred

"Compelling...An estimable contribution to the Lincoln literature." Booklist, ALA

"[Shenk argues] with uncommon common sense, a rare understanding of historical context, and a close reading of the primary sources." Library Journal Starred

"Intellectually energetic. . .By treating Lincoln from this angle, Shenk does gain a dimension that not all Lincoln books achieve." --William Lee Miller The Washington Post