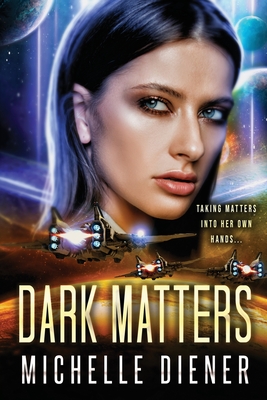 DARK MATTERS . . . taking matters into her own hands

Lucy Harris is on the run, not sure where she can turn to for help, or if help is even available. But even as her abductors chase her down, she realizes they don't just want to recapture her, they want to erase her.

When your very existence puts a planet at the risk of war, there's no choice but to do everything in your power to stay out of your enemies hands.

A predator . . . waiting for the chance to pounce

The powerful AI battleship, Bane, is accompanying the United Council envoy to Tecra to mete out the punishment the Tecrans have earned for breaking UC law. He revels in the power he's about to have over his old masters. But his mission isn't only to rain down retribution on the people who kept him chained for years, he's also looking for a human woman his fellow Class 5 mentioned in the final seconds of his life. Paxe admitted to taking Lucy Harris from Earth, and Bane has been looking for her ever since.

Commander Dray Helvan thinks the Grih made a mistake in not pushing for war with the Tecran, but he's had to accept the compromise, that he and the other envoys from the United Council will go to Tecra and dismantle its military from the top down. His mission is not one of his choosing, but when he and his team arrive, he's handed a very different job. While he distrusts Bane on principle, when the thinking system tells him there's a woman running for her life on the planet below, he will do whatever he has to to see her safe. And if that means war for Tecra, well, then it means war.