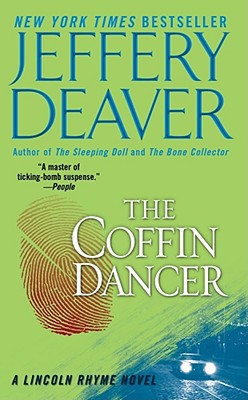 By Jeffery Deaver
$7.99
Email or call for price.

NYPD criminalist Lincoln Rhyme joins his beautiful protégé, Amelia Sachs, in the hunt for the Coffin Dancer -- an ingenious killer who changes appearance even faster than he adds to his trail of victims. They have only one clue: the madman has a tattoo of the Grim Reaper waltzing with a woman. Rhyme must rely on his wits and intuition to track the elusive murderer through New York City -- knowing they have only forty-eight hours before the Coffin Dancer strikes again.

Jeffery Deaver is the #1 international bestselling author of more than forty novels, three collections of short stories, and a nonfiction law book. His books are sold in 150 countries and translated into 25 languages. His first novel featuring Lincoln Rhyme, The Bone Collector, was made into a major motion picture starring Denzel Washington and Angelina Jolie, which is currently being adapted for television by NBC.

He's received or been shortlisted for a number of awards around the world, including Novel of the Year by the International Thriller Writers and the Steel Dagger from the Crime Writers' Association in the United Kingdom. In 2014, he was the recipient of three lifetime achievement awards. A former journalist, folksinger, and attorney, he was born outside of Chicago and has a bachelor of journalism degree from the University of Missouri and a law degree from Fordham University.

San Jose Mercury News This is as good as it gets....The Lincoln Rhyme series is simply outstanding.

People Deaver is a master of ticking-bomb suspense.

Booklist Intense and heart-stopping...leaves readers gasping at the stunning climax.

People Deaver...is a master of ticking-bomb suspense... Rhyme, now a forensic consultant, is more relentless than ever. Especially when, as in his chilling new case, he has a personal score to settle.

USA Today Deaver revs up the already supercharged tension by cramming all of the action in The Coffin Dancer into forty-eight hours.

Publishers Weekly Revelations and reversals punctuate this thriller like a string of firecrackers....Superb plotting and brisk, no-nonsense prose.

Library Journal Quick to the punch, The Coffin Dancer is diabolically packed with the good stuff: coverups, mystery, action.

Kirkus Reviews Fair warning to newcomers: Author Deaver is just as cunning and deceptive as his killer; don't assume he's run out of tricks until you've run out of pages.

St. Petersburg Times Readers who like "insider information" on police and FBI lingo will enjoy details Deaver adds to the dialogue.