Globalists: The End of Empire and the Birth of Neoliberalism (Paperback) 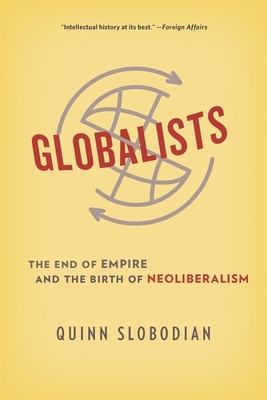 "A groundbreaking contribution...Intellectual history at its best."
--Stephen Wertheim, Foreign Affairs Neoliberals hate the state. Or do they? In the first intellectual history of neoliberal globalism, Quinn Slobodian follows a group of thinkers from the ashes of the Habsburg Empire to the creation of the World Trade Organization to show that neoliberalism emerged less to shrink government and abolish regulations than to redeploy them at a global level. It was a project that changed the world, but was also undermined time and again by the relentless change and social injustice that accompanied it. "Slobodian's lucidly written intellectual history traces the ideas of a group of Western thinkers who sought to create, against a backdrop of anarchy, globally applicable economic rules. Their attempt, it turns out, succeeded all too well."
--Pankaj Mishra, Bloomberg Opinion "Fascinating, innovative...Slobodian has underlined the profound conservatism of the first generation of neoliberals and their fundamental hostility to democracy."
--Adam Tooze, Dissent "The definitive history of neoliberalism as a political project."
--Boston Review