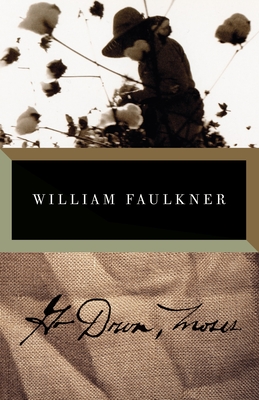 “I believe that man will not merely endure: he will prevail. He is immortal, not because he alone among creatures has an inexhaustible voice, but because he has a soul, a spirit capable of compassion and sacrifice and endurance.” —William Faulkner, on receiving the Nobel Prize

Go Down, Moses is composed of seven interrelated stories, all of them set in Faulkner’s mythic Yoknapatawpha County. From a variety of perspectives, Faulkner examines the complex, changing relationships between blacks and whites, between man and nature, weaving a cohesive novel rich in implication and insight.

William Cuthbert Faulkner was born in 1897 and raised in Oxford, Mississippi, where he spent most of his life. One of the towering figures of American literature, he is the author of The Sound and the Fury, Absalom, Absalom!, and As I Lay Dying, among many other remarkable book. Faulkner was awarded the Nobel Prize in 1950 and France’s Legion of Honor in 1951. He died in 1962.

“For range of effect, philosophical weight, originality of style, variety of characterization, humor, and tragic intensity, [Faulkner’s works] are without equal in our time and country.” —Robert Penn Warren

“He is the greatest artist the South has produced. . . . Indeed, through his many novels and short stories, Faulkner fights out the moral problem which was repressed after the nineteenth century [yet] for all his concern with the South, Faulkner was actually seeking out the nature of man. Thus we must turn to him for that continuity of moral purpose which made for greatness of our classics.” —Ralph Ellison