The Garden of Eden (Paperback) 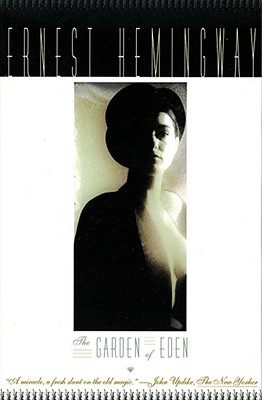 The Garden of Eden (Paperback)


Usually Ships in 1-5 Days
The last uncompleted novel of Ernest Hemingway, published posthumously in 1986, charts the life of a young American writer and his glamorous wife who fall for the same woman.

A sensational bestseller when it appeared in 1986, The Garden of Eden is the last uncompleted novel of Ernest Hemingway, which he worked on intermittently from 1946 until his death in 1961. Set on the Côte d'Azur in the 1920s, it is the story of a young American writer, David Bourne, his glamorous wife, Catherine, and the dangerous, erotic game they play when they fall in love with the same woman. "A lean, sensuous narrative...taut, chic, and strangely contemporary," The Garden of Eden represents vintage Hemingway, the master "doing what nobody did better" (R. Z. Sheppard, Time).
Ernest Hemingway did more to change the style of English prose than any other writer of his time. Publication of The Sun Also Rises and A Farewell to Arms immediately established Hemingway as one of the greatest literary lights of the twentieth century. His classic novel The Old Man and the Sea won the Pulitzer Prize in 1953. Hemingway was awarded the Nobel Prize for Literature in 1954. His life and accomplishments are explored in-depth in the PBS documentary film from Ken Burns and Lynn Novick, Hemingway. Known for his larger-than-life personality and his passions for bullfighting, fishing, and big-game hunting, he died in Ketchum, Idaho on July 2, 1961.