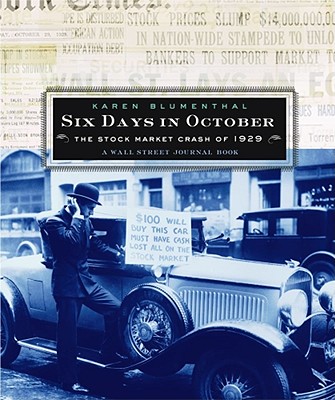 By Karen Blumenthal
$24.99
Email or call for price.

Over six terrifying, desperate days in October 1929, the fabulous fortune that Americans had built in stocks plunged with a fervor never seen before. At first, the drop seemed like a mistake, a mere glitch in the system. But as the decline gathered steam, so did the destruction. Over twenty-five billion dollars in individual wealth was lost, vanished gone. People watched their dreams fade before their very eyes. Investing in the stock market would never be the same.
Here, Wall Street Journal bureau chief Karen Blumenthal chronicles the six-day period that brought the country to its knees, from fascinating tales of key stock-market players, like Michael J. Meehan, an immigrant who started his career hustling cigars outside theaters and helped convince thousands to gamble their hard-earned money as never before, to riveting accounts of the power struggles between Wall Street and Washington, to poignant stories from those who lost their savings -- and more -- to the allure of stocks and the power of greed.
For young readers living in an era of stock-market fascination, this engrossing account explains stock-market fundamentals while bringing to life the darkest days of the mammoth crash of 1929.

Karen Blumenthal (1959–2020) was a financial journalist and editor whose career included five years with The Dallas Morning News and twenty-five with The Wall Street Journal before becoming an award-winning children’s nonfiction book writer. Three of her books were finalists for the YALSA Excellence in Nonfiction for Young Adults Award, and she was the author of Sibert Honor Book Six Days in October: The Stock Market Crash of 1929.