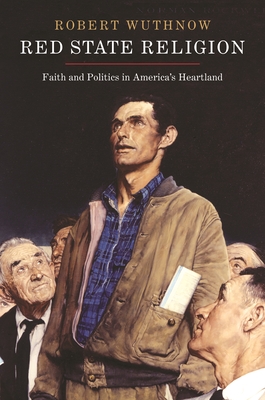 What Kansas really tells us about red state America

No state has voted Republican more consistently or widely or for longer than Kansas. To understand red state politics, Kansas is the place. It is also the place to understand red state religion. The Kansas Board of Education has repeatedly challenged the teaching of evolution, Kansas voters overwhelmingly passed a constitutional ban on gay marriage, the state is a hotbed of antiabortion protest--and churches have been involved in all of these efforts. Yet in 1867 suffragist Lucy Stone could plausibly proclaim that, in the cause of universal suffrage, Kansas leads the world How did Kansas go from being a progressive state to one of the most conservative? In Red State Religion, Robert Wuthnow tells the story of religiously motivated political activism in Kansas from territorial days to the present. He examines how faith mixed with politics as both ordinary Kansans and leaders such as John Brown, Carrie Nation, William Allen White, and Dwight Eisenhower struggled over the pivotal issues of their times, from slavery and Prohibition to populism and anti-communism. Beyond providing surprising new explanations of why Kansas became a conservative stronghold, the book sheds new light on the role of religion in red states across the Midwest and the United States. Contrary to recent influential accounts, Wuthnow argues that Kansas conservatism is largely pragmatic, not ideological, and that religion in the state has less to do with politics and contentious moral activism than with relationships between neighbors, friends, and fellow churchgoers. This is an important book for anyone who wants to understand the role of religion in American political conservatism.

Robert Wuthnow, a native of Kansas, teaches sociology and directs the Center for the Study of Religion at Princeton University. He is the author of many books about American religion and culture, including "Remaking the Heartland: Middle America since the 1950s" and "Small-Town America: Finding Community, Shaping the Future" (both Princeton).