A Thirst for Empire: How Tea Shaped the Modern World (Hardcover) 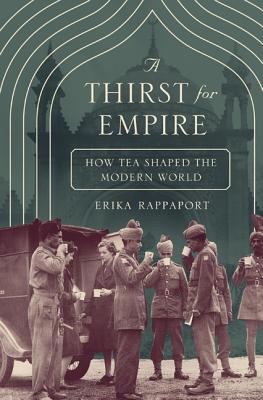 Tea has been one of the most popular commodities in the world. Over centuries, profits from its growth and sales funded wars and fueled colonization, and its cultivation brought about massive changes--in land use, labor systems, market practices, and social hierarchies--the effects of which are with us even today. A Thirst for Empire takes a vast and in depth historical look at how men and women--through the tea industry in Europe, Asia, North America, and Africa--transformed global tastes and habits and in the process created our modern consumer society. As Erika Rappaport shows, between the seventeenth and twentieth centuries the boundaries of the tea industry and the British Empire overlapped but were never identical, and she highlights the economic, political, and cultural forces that enabled the British Empire to dominate--but never entirely control--the worldwide production, trade, and consumption of tea. Rappaport delves into how Europeans adopted, appropriated, and altered Chinese tea culture to build a widespread demand for tea in Britain and other global markets and a plantation-based economy in South Asia and Africa. Tea was among the earliest colonial industries in which merchants, planters, promoters, and retailers used imperial resources to pay for global advertising and political lobbying. The commercial model that tea inspired still exists and is vital for understanding how politics and publicity influence the international economy. An expansive and original global history of imperial tea, A Thirst for Empire demonstrates the ways that this fluid and powerful enterprise helped shape the contemporary world.

Erika Rappaport is professor of history at the University of California, Santa Barbara. She is the author of Shopping for Pleasure: Women in the Making of London's West End (Princeton) and coeditor of Consuming Behaviors: Identities, Politics and Pleasure in Twentieth Century Britain (Bloomsbury).