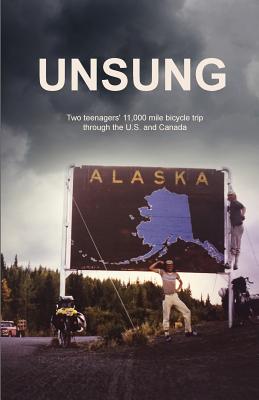 This book portrays the adventuresome spirit of Gerald, a nineteen year old experienced bicyclist and seventeen year old Christian, a not so experienced but gutsy bicyclist, who bravely agreed to join Gerald in bicycling across the United States and much of Canada, to Alaska. It was 1986 in Bethesda, MD, and Gerald, the son of visiting German parents temporarily working in the U.S., wished to see as much of the country as possible prior to his return to Germany. Chris is the second son of the author.

Chris and Gerald were just finishing high school when Gerald convinced Chris that life would soon impose its inevitable requirement to get serious and, if either were to experience a memorable life adventure, immediately after graduation was the best time to ensure that such an adventure might happen. Gerald wanted to visit Alaska and neither teenager's budget could afford the luxury of motels so they figured to rough it, sleeping in an often wet tent...in the wilderness, in back yards and wherever space was available. There were nights with little to no sleep. They figured to make the trip on an average expenditure of $10 per day which, even in 1986, didn't go far.

Focus story's focuss is on a perspective of and appreciation for the logistics task these two adventurers faced, notwithstanding the lack of creature comforts, and their thoughts throughout, at least, from the recollections of Chris, and set in context by the author. Regretfully, Gerald could not be located to integrate his perspective and to possibly access his plethora of trip photos.

Each evening, following an exhausting 120 mile minimum daily span of road the boys planned to cover, they had to inspect and maintain their bicycles and to, occasionally, order ahead the inevitable replacement parts, to be retrieved at pre-selected stops along their proposed route. They accomplished this goal despite broken equipment, prevailing westerly headwinds, bad weather, and nightly setup of the tent in whatever environment the evening provided. The minimum 120 mile quota included an average weight handicap on each bicycle of over 100 pounds of camping and repair equipment, personal gear and food.

Apologies are offered for dwelling on their time in New York City. Chris was born and grew up there and Gerald wanted to immerse himself in the city culture, history, facts and legends as time permitted. It was all part of the tour and, for what it was worth, Chris was the tour guide. Locations visited, people encountered and events experienced throughout the trip are all true. Some of the thoughtful whimsy and associated dialog are resurrected, and possibly embellished by the author after all these years, having mentally revisited and back referenced the trip, often interjecting Christian's recalled experiences from his previous trips by car with his father (author) and brother.