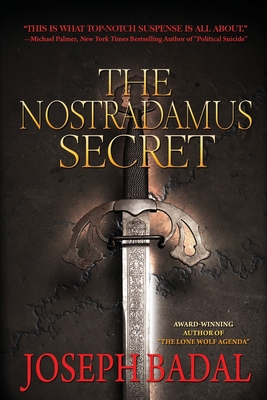 "The Nostradamus Secret," book three in the 5-book Danforth Saga, builds on Nostradamus's "lost" 58 quatrains and segues to present day. These lost quatrains have surfaced in the hands of a wealthy Iranian megalomaniac who believes his rise to world power was prophesied by Nostradamus. But he sees the United States as the principal obstacle to the achievement of his goals. So, the first step he takes is to attempt to destabilize the United States through a vicious series of terrorist attacks and assassinations.Joseph Badal offers up another action-packed story loaded with intrigue, fascinating characters, and geopolitical machinations that put the reader on the front line of present-day international conflict. You will be transported from a 16th century French monastery to the CIA, to crime scenes, to the Situation Room at the White House, to Middle Eastern battlefields."The Nostradamus Secret" presents non-stop action in a contemporary context that will make you wonder whether the story is fact or fiction, history or prophesy.

Prior to a long finance career, including serving as a senior executive and board member of a NYSE-listed company, Joseph Badal served for six years as a commissioned officer in the U.S. Army in critical, highly classified positions in the U.S. and overseas, including tours of duty in Greece and Vietnam. He earned numerous military decorations. He holds undergraduate and graduate degrees in International Finance (Temple University) and Business Administration (University of New Mexico). He graduated from the Defense Language Institute, West Coast, and from Stanford University Law School's Director College. Joe now serves on the boards of several companies. He has had seven suspense novels published, including "Ultimate Betrayal," which was released in April 2014. "The Lone Wolf Agenda," which was released in 2013, was named the top Mystery/Thriller novel in the 2013 New Mexico/Arizona Book Awards competition. He also writes a monthly blog titled Everyday Heroes, and has written short stories published in the "Uncommon Assassins" and "Someone Wicked" anthologies. Joe has written dozens of articles that have been published in various business and trade journals and is a frequent speaker at business, civic, and writers' events.