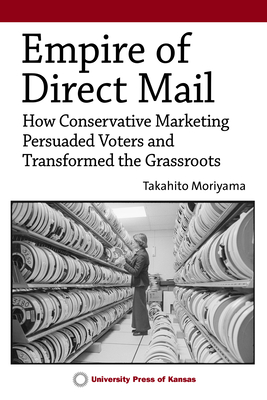 
Usually Ships in 1-5 Days
The rapid growth of the conservative movement has long fascinated historians, many of whom have focused on the grassroots efforts in the Sunbelt. Empire of Direct Mail examines how conservative operatives got their message out to their supporters through computerized direct mail, a significant but understudied communications technology. The story centers on Richard Viguerie, a pioneer of political direct mail who was known as the "Funding Father" of the conservative movement. His consulting firm established a database of conservative prospects and mailed millions of unsolicited letters. By the 1970s, Viguerie emerged as the central fundraiser in conservative politics, financing right-wing organizations and politicians such as George Wallace, Jesse Helms, and Ronald Reagan. Moriyama shows that the rise of right-wing direct mail communication in the postwar years coincided with a new strategy: the use of this new technology to stoke negative emotions, such as fury and fear, among the letter recipients. In the period of broadcasting, conservative fundraisers established the new approach of targeting individual voters and promoting negative emotions to win elections. Before Rush Limbaugh's talk show, Fox News, Twitter, and Cambridge Analytica, conservatives used direct mail to spread messages of anxiety and anger to raise funds and mobilize the grassroots. Through extensive archival research of fundraising activities in the conservative movement and key elections from 1950 to 1980, Empire of Direct Mail offers a political history of the role played by communications technology in the development of modern US conservatism.