Being a Writer: Advice, Musings, Essays and Experiences From the World's Greatest Authors (Hardcover) 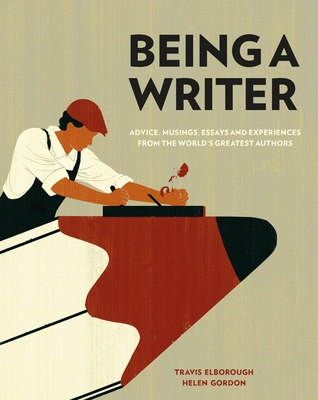 Being a Writer: Advice, Musings, Essays and Experiences From the World's Greatest Authors (Hardcover)

Out of Print - This Title is Unlikely to be Available.
The joys and challenges of being a writer are explored in this inspiring assemblage of wit, wisdom and hard-won practical advice from some of the world’s greatest authors musing on the art of writing and how they came to define themselves as writers. From Samuel Johnson in eighteenth-century London to Lorrie Moore in twenty-first-century Wisconsin, the contributors range from the canon to contemporary, covering more than 250 years, and come from all over the world. Beautifully illustrated throughout, this stunning anthology explores and illuminates the pleasures and pitfalls of the compulsion to write, with advice about the whole messy business of writing literature and what it takes to be a writer. The perfect gift for aspiring writers, curious readers, and anyone interested in what the world's greatest authors have to say about the art of writing.

Described as 'one of the country's finest pop culture historians', Travis Elborough is an acclaimed author and social commentator who lives in London. His work delves into the ephemera of retro culture as well as the history of London, geography, and a broad range of other subjects. His Atlas of Vanishing Places won the Illustrated Book of the Year at the Edward Stanford Travel Writing Awards in 2020, and he has also written The Bus We Loved, a passionate love letter to the Routemaster bus which defined London transport for more than 50 years. His other works include A Traveller’s Year, A London Year, The Long-Player Goodbye, Being A Writer and A Walk in the Park: The Life and Times of a People’s Institution. Travis is a regular contributor to Radio 4 and the Guardian, and has penned articles on all aspects of travel and culture, from pirates in the Caribbean to donkeys at the British seaside. He has written for the Times, Sunday Times, New Statesman, BBC History Magazine and Kinfolk among others, and is a visiting lecturer at the University of Westminster, where he teaches creative writing.

Helen Gordon is the co-author of Being A Writer (Frances Lincoln) and author of Landfall, a novel published by Penguin. Her journalism has appeared in Intelligent Life and the Guardian. She is former associate editor of Granta magazine, lives in London and teaches creative writing at the University of Hertfordshire.

JOEY GUIDONE is an Italian illustrator who currently lives and works at the foothills of the Alps. He studied illustration at the Istituto Europeo di Design in Turin and Mimaster in Milan. He was selected by the Society of Illustrators as part of showcase Illustrators 57, and also included in the winner's list of Creative Quarterly Journal's CQ42 and CQ43. Since 2015 he has been represented by Californian agency Salzman International. He is commissioned by both European and US clients and his work has featured in magazines, books and commercial projects.