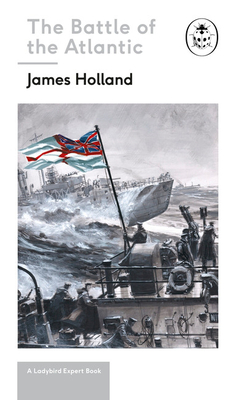 This is book number 9 in the The Ladybird Expert Series series.

Understand the longest battle of World War Two.This is an accessible, insightful and authoritative account of the naval campaign that kept supply lines open and enabled Britain to continue to fight.

Historian, author and broadcaster James Holland draws on the latest research and interviews with participants to bring colour, detail and a fresh perspective to the story of how the siege of Europe was broken.

Inside, you'll discover exactly what happened in the Battle of the Atlantic. Ships, submarines and aircraft fought a bitter war that saw the deaths of over 100,000 servicemen and civilians.

- The tragic demise of SS Athenia
- The power of U-boats
- Advantages of Britain's naval experience
- German naval Enigma codes
- The rapid development of advancing weaponry
- And much more . . .

Written by the leading lights and most outstanding communicators in their fields, the Ladybird Expert books provide clear, accessible and authoritative introductions to subjects drawn from science, history and culture.

James Holland is an award-winning historian, writer, and broadcaster. The author of a number of best-selling histories including Battle of Britain, Dam Busters, and most recently, The War in the West, hehas also written nine works of historical fiction, including the Jack Tanner novels. He has presented - and written - a large number of television programmes and series, and is also Co-founder of the Chalke Valley History Festival. He can be found on Twitter as @James1940.
Shines a light on some of the darkest and most dramatic moments of the six-year conflict. - - Daily Mail