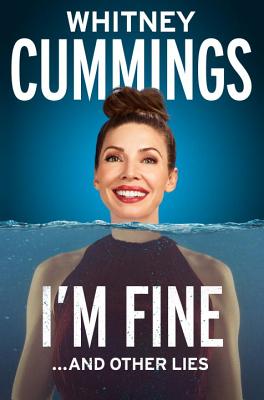 By Whitney Cummings
$27.00
Email or call for price.

The perfect mix of comedic memoir and self-help book, Whitney accomplishes something remarkable in this work: being both informative AND funny. Woven into stories from her life, she shares interesting and helpful information about neurology, recovery from co-dependency, and healing from trauma. And she does it with the wit and humor of a stand up comedian.

“Whitney Cummings has written a book about being, well, not fine—and what to do when you find yourself with brutal anxiety and a co-dependency disorder; all in her trademark wit, humor, and honesty. This book, however, is fine as hell.”—Sophia Amoruso, author of #Girlboss

“The funniest cry for help you'll read this year.”—BJ Novak

Well, well, well. Look at you, ogling my book page....I presume if you’re reading this it means you either need more encouragement to buy it or we used to date and you’re trying to figure out if you should sue me or not.

Here are all the stories and mistakes I’ve made that were way too embarrassing to tell on stage in front of an actual audience; but thanks to not-so-modern technology, you can read about them here so I don’t have to risk having your judgmental eye contact crush my self-esteem. This book contains some delicious schadenfreude in which I recall such humiliating debacles as breaking my shoulder while trying to impress a guy, coming very close to spending my life in a Guatemalan prison, and having my lacerated ear sewn back on by a deaf guy after losing it in a torrid love affair. In addition to hoarding mortifying situations that’ll make you feel way better about your choices, I’ve also accumulated a lot of knowledge from therapists, psychotherapists, and psychopaths, which can probably help you avoid making the same mistakes I’ve made. Think of this book as everything you’d want from the Internet all in one place, except without the constant distractions of ads, online shopping, and porn.

I’m not sure what else to say to say, except that you should buy it if you want to laugh and learn how to stop being crazy. And if we used to date, see you in court.

Whitney Cummings is a Los Angeles–based comedian, actor, writer, producer, and director. Best known for creating and starring in the NBC series Whitney, Whitney is also co-creator and co-writer of the Emmy-nominated CBS comedy series 2 Broke Girls. She has appeared in multiple television shows and films, and has performed in stand-up specials for both HBO and Comedy Central, one of which was nominated for an American Comedy Award. Up next for Whitney is her film directorial debut, a movie based on the book The Female Brain by Louann Brizendine.

One of TODAY's Top Self-Help Books to Read in 2020