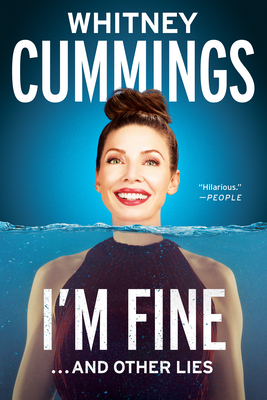 After getting her start as a stand-up comic and then breaking out with her wildly successful CBS sitcom 2 Broke Girls (she's the creator, writer, and executive producer), Whitney Cummings has seen a few things and is turning to the written word to tell us all the stuff she doesn't say on stage.

This book contains some delicious schadenfreude in which Whitney recalls such humiliating debacles as breaking her shoulder while trying to impress a guy, coming very close to spending her life in a Guatemalan prison, and having her lacerated ear sewn back on by a deaf guy after losing it in a torrid love affair.

Full of intellect, anxiety, chutzpah, and profundity, I'M FINE...AND OTHER LIES is, in Whitney's words, like the internet if the internet were honest and didn't hate women. With her signature ball-busting edge and self-deprecation, Whitney comes clean about what has shaped her into the trailblazing comic that she is today. This intimate, no-holds-barred look at Whitney's life is a revelatory, profoundly astute, and most importantly, honest tale of what it means to be a woman in today's day and age and Twittersphere, with all of the insecurities and anxieties that come with that territory and with the most important takeaway being that, at the end of the day, no matter her situation, she's fine...and other lies.

Whitney Cummings is a Los Angeles-based comedian, actor, writer, producer, and director. Best known for creating and starring in the NBC series Whitney, Whitney also is also co-creator and co-writer of the Emmy-nominated CBS comedy series 2 Broke Girls. She has appeared in multiple television shows and films, as well as multiple stand-up specials, one of which was nominated for an American Comedy Award. She is host of the podcast Good for You.

One of TODAY's Top Self-Help Books to Read in 2020