This Land Is Our Land: How We Lost the Right to Roam and How to Take It Back (Paperback) 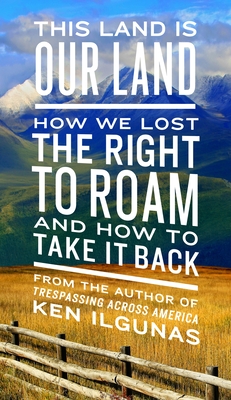 Private property is everywhere. Almost anywhere you walk in the United States, you will spot “No Trespassing” and “Private Property” signs on trees and fence posts. In America, there are more than a billion acres of grassland pasture, cropland, and forest, and miles and miles of coastlines that are mostly closed off to the public. Meanwhile, America’s public lands are threatened by extremist groups and right-wing think tanks who call for our public lands to be sold to the highest bidder and closed off to everyone else. If these groups get their way, public property may become private, precious green spaces may be developed, and the common good may be sacrificed for the benefit of the wealthy few.

Ken Ilgunas, lifelong traveler, hitchhiker, and roamer, takes readers back to the nineteenth century, when Americans were allowed to journey undisturbed across the country. Today, though, America finds itself as an outlier in the Western world as a number of European countries have created sophisticated legal systems that protect landowners and give citizens generous roaming rights to their countries' green spaces.

Inspired by the United States' history of roaming, and taking guidance from present-day Europe, Ilgunas calls into question our entrenched understanding of private property and provocatively proposes something unheard of: opening up American private property for public recreation. He imagines a future in which folks everywhere will have the right to walk safely, explore freely, and roam boldly—from California to the New York island, from the Redwood Forest to the Gulf Stream waters.

Ken Ilgunas is an award-winning author, journalist, and backcountry ranger in Alaska. He has hitchhiked ten thousand miles across North America, paddled one thousand miles across Ontario in a birchbark canoe, and walked 1,700 miles across the Great Plains, following the proposed route of the Keystone XL pipeline. Ilgunas has a BA from SUNY Buffalo in history and English, and an MA in liberal studies from Duke University. The author of travel memoirs Walden on Wheels and Trespassing Across America, he is from Wheatfield, New York.

“There’s nothing much uglier than a ‘No Trespassing’ sign—and in much of the world you don’t see them, because people have the right to ramble across the land. In this unique and powerful volume, Ken Ilgunas explains why Americans are fenced in, and how we could change that sad state of affairs!” —Bill McKibben, author Radio Free Vermont

"Ilgunas returns...with a heavily researched, passionate argument about the need for America to emulate many other countries and allow its citizens to roam across the land, public as well as private. Earnest, thoughtful, and alarming in places—an optimistic work that urges America toward a profound cultural shift." —Kirkus Reviews

"Ken Ilgunas earned a following with his 2013 Walden on Wheels, and thank goodness he's back with This Land Is Our Land: part polemic, part American travelogue, and part primer on the history of land use laws... Before Americans need a membership card to get outside, everyone who moves should read this book." —Adventure Journal

"At a time when the federal government is expanding corporations’ access to public land, for activities such as logging and oil exploration, Mr. Ilgunas makes a contrary argument, that we should ease the public’s access to private land, for recreational pursuits such as hiking and swimming." —The Wall Street Journal

"Nonetheless, this little book offers much food for thought. Ilgunas may be a dreamer, utopian in his thinking, yet the examples he cites of people in other nations recognizing a right to roam make me think some form of this might not be beyond the pale in the United States." —National Parks Traveler

“Ken Ilgunas’ argument goes against the grain of this fearful time. As physical freedom for children and adults constricts, as the radius of freedom around our homes diminishes to the front stoop, our other freedoms diminish, too. So does our sense of community and our democracy, which require us to go outside, wander through our neighborhoods and beyond, into the woods and fields, and know the people and the nature of things around us. Tragically, as we withdraw indoors out of fear of strangers, our abandonment of our neighborhoods and natural areas makes them less safe. Following the example of enlightened laws in other countries, America needs new legislation guaranteeing the right to roam—which is the right to know and find meaning in what lies beyond.” —Richard Louv, author of The Nature Principle and Last Child in the Woods: Saving Our Children from Nature-Deficit Disorder

“A brilliant and timely book! The right to walk America—the right to roam—won't solve every problem but it will make us healthier, more fit, more civil, more sociable, more aware, smarter, more connected and alive. Woody Guthrie had it right this is our land, so let's reaffirm our right and get moving.” —David W. Orr, author of Dangerous Years: Climate Change, the Long Emergency, and the Way Forward

“How wonderfully refreshing to have a skilled writer like Ken Ilgunas shake us from our daily distractions and invite us to look to the horizon, to the beautiful lands around us and to a future in which we enjoy them more fully. With Ilgunas leading us along an idea that first sounds radical if not misguided becomes, step by step, more workable and appealing. Who knows, he just might be right: we can both respect private property and vastly expand access to the lands we all call home.” —Eric Freyfogle, author of On Private Property and Our Oldest Task

“This Land Is Our Land is a gift—a vision of how Americans can establish a new relationship with their land and with each other.  Beautifully written and thoroughly researched, Ilgunas’ book raises profound questions about exclusion in the American landscape and points the way to a more inclusive future.” —John Lovett, Distinguished Professor of Law, Loyola University