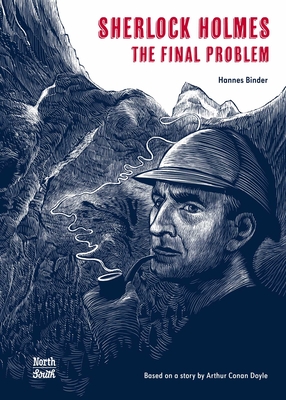 Hunting hat, smoking pipe, coat collar turned up— that's how we know Sherlock Holmes, the most famous detective of all time. He usually investigates from London's Baker Street. But Holmes' most spectacular case leads him in a fast-paced chase from the metropolis of London across the continent to the Swiss Alps. At the roaring Reichenbach Falls there is a showdown between Holmes and his archenemy Professor Moriarty. Who will triumph in this battle between good and evil?

Black and white line drawings on scratchboard are Hannes Binder's trademark. The Zurich illustrator has created dramatic images of the Swiss landscape for this epic story, the pull of which is hard to resist. An exciting graphic novel for beginners and seasoned Holmes fans alike.

Hannes Binder was born in Zürich, Switzerland. He studied at the School of Arts and Crafts in Zürich, and later worked as a graphic designer and illustrator in Milan and Hamburg. He has created fifty works for children and adults, using a special scratchboard technique. Among his many awards, he has won the Swiss Prize for Children's and Youth Literature. He lives in Zürich and Tessin.

Sir Arthur Conan Doyle was born in 1859 in Edinburgh, Scotland. He studied medicine and later worked as a doctor in the Arctic and in West Africa. In 1887, he published the first Sherlock Holmes story. Altogether he wrote fifty-six short stories and four novels about Holmes and his faithful companion, Dr. Watson. Toward the end of his life, he became more and more interested in spiritualism, which was popular at the time. Conan Doyle died in 1930 in Sussex, England.

David Henry Wilson, born in London, is a playwright, novelist, children’s book author, and translator. His plays have been produced in many well-known theaters in Great Britain as well as abroad, and his children’s books—especially the Jeremy James series—have been translated into many languages. His novel The Coachman Rat received critical acclaim on both sides of the Atlantic. For many years he lectured at the universities of Bristol (England) and Konstanz (Germany), where he founded the university theater. His translations from French and German cover many subjects, ranging from literary theory, art, travel, and general culture to children’s novels and picture books.