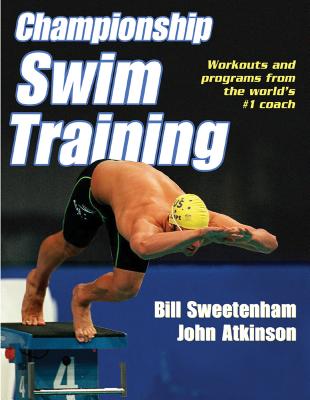 By Bill Sweetenham, John D. Atkinson
Email or call for price
Out of Print - This Title is Unlikely to be Available.

Whether you're a coach looking to build or supplement your program or a swimmer seeking to improve your technique and time, you'll benefit from swim coaching legend Bill Sweetenham's proven methods for improving performance in the backstroke, butterfly, breaststroke, freestyle, and individual medley.

Sweetenham has spent his career developing world-class swimmers—first for Australia, then for Hong Kong, and now for Great Britain. He engineered Australia's success at four Olympic Games and five Commonwealth Games and has coached 63 top swimmers in international competitions to 27 Olympic and World Championship medals. Now, through Championship Swim Training, he and coauthor John Atkinson, a former national team coach in Australia and current national youth coach with British Swimming, provide the detailed plans and strategies to help all swimmers maximize their swimming potential.

Beginning with Sweetenham's five golden rules for swimming that apply to all swimmers—regardless of their background—Championship Swim Training is divided into two parts.

Part I, Technique Drills and Sets, deals with training zones and benchmark sets so critical to effective training and goal setting. Also included is a series of drill progressions and checklists that can be applied to each stroke and the individual medley. These progressions will help pinpoint stroke deficiencies and improve stroke technique as well as sculling, starts, turns, finishes, and kick and pull training. The checklists give swimmers and coaches tips for training and competition.

Part II, Workouts and Programs, is full of information for coaches to plan the long-term development of juniors through masters swimmers. Sample training sets are provided and can be customized to suit the level of that swimmer or squad. Part II also covers the critical tapering phase to get swimmers ready for competition and provides detailed racing strategies. Dryland conditioning suggestions help swimmers train all year round, whether in or out of the water. And no world-class coaching book would be complete without a chapter on how to completely and objectively evaluate your training program.

Championship Swim Training provides a complete roadmap for coaches and swimmers who want to follow a systematic and proven way to record-breaking times!

Bill Sweetenham was the coaching force behind Australia's success at the Olympic and Commonwealth Games. He was voted Australian Coach of the Year three times and has coached 63 swimmers in international competitions to 27 medals in four Olympics and seven World Championships. He spent more than 20 years coaching Australian swimmers to success before accepting the position of head coach of the Hong Kong Sports Institute (1991 to 1994). He then returned to Australia as the national youth coach to prepare up-and-coming swimmers for the 2000 Olympics. To date, he says he's most proud of placing nine swimmers on the 1989 Australian Pan Pacific Team who scored a 100% strike rate for improved heats to final performances and a 100% personal best strike rate.

Sweetenham was named Great Britain's national performance director in November 2000, a position he currently holds. The rebuilding of Great Britain's team didn't take long: They posted their best results since 1975 at the 2001 World Championships in Japan.

In addition to taking national teams to the height of international success, Sweetenham continues to lecture, publish, and conduct clinics all over the world.

John Atkinson returned to his homeland and joined Sweetenham in Great Britain as the national youth coach with British Swimming in November 2000. Born in the United Kingdom, where he swam competitively before starting a coaching career in 1985, Atkinson was a team coach at the national and club level in Australia from 1995 to 2000. While in Australia, he coached at the Elizabeth Aquatic Club; was team coach with the Australian team at the Oceania Championships in 1997; national youth camp coach in 1997; and head coach for the successful Tip Top program in 1998, where he first had the opportunity to work with Sweetenham.

Atkinson has worked with teams from Australia, Japan, India, and the Republic of South Africa national youth team. He currently resides in Lancashire, England, with his wife, Victoria.

Coach Bill Sweetenham, with his vast international experience, and John Atkinson, young and enterprising, share their well-thought-out philosophy on organizing, training, and preparing swimmers for high-level competition. I highly recommend this book to all coaches working with competitive swimmers the world over.

Full of ideas and innovations, this is more than just another swim book—it's one of the best. Dive in and try it. You will learn a lot, I guarantee.

Championship Swim Training is a well organized and comprehensive description of all aspects of competitive swimming presented in meticulous detail. Any coach or swimmer who reads this book is assured of gaining valuable insight into the nuances of the sport.

From American Swimming Coaches Association
Provides a complete roadmap for coaches and swimmers who want to follow a systematic and proven way to record-breaking times!