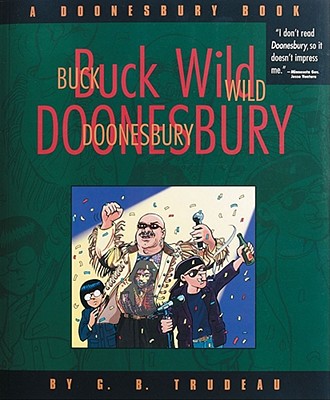 This is book number 19 in the Doonesbury series.

Actual events may provide plenty of grist for the cartoon mill, but it takes a mind like Garry Trudeau's to sift through it for the hilarious kernel of truth. From the Bill Clinton-Ken Starr face-off to high-flying Internet start-ups to new ways to plagiarize term papers, Trudeau hones in on the things we take so seriously and livens them up with craftyjolts of jocularity.

In this Doonesbury collection, Buck Wild Doonesbury, Trudeau is at his best. We watch as Uncle Bernie pulls the plug on Mike and Kim's entrepreneurial venture, the virtual company that follows that rich tradition of losing money and lots of it. We sit in on a press conference with America's most famous special prosecutor who admits he spent four years "Leaking. Trolling. It's been hectic." And we behold Zonker as he passes along his long-held slacker philosophy to his young nephew Zipper.

Through it all, Doonesbury retains its fresh and innovative style. Doonesbury has, over the years, tweaked everything and nearly everyone, from Donald Trump's aggressive real estate style to Dan Quayle's unblinking stance on family values to Newt Gingrich's ticking-time-bomb technique, while keeping us entertained with characters including Boopsie, Duke, J.J., B.D., and Earl. Buck Wild Doonesbury, like the strip, is provocative, controversial, and hilarious.
G. B. Trudeau has been drawing his Pulitzer Prize-winning comic strip for more than forty years. In addition to cartooning, Trudeau has worked in theater, film, and television. He also has been a contributing columnist for the New York Times op-ed page and later an essayist for Time magazine. He is a fellow of the American Academy of Arts & Sciences. He lives in New York City with his wife, Jane Pauley. They have three grown children.