The Revolt of the English Majors: A Doonesbury Book (Paperback) 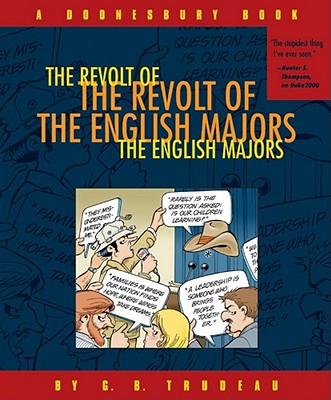 The Revolt of the English Majors: A Doonesbury Book (Paperback)

This is book number 21 in the Doonesbury series.

Even challenging Dubya to a "pronunciation bee" can't save Uncle Duke's weird horse race for the White House. In the end, the former Ambassador passes out in a snow bank while the Cheney Administration kicks into high gear. Predictablistically, the new presidential syntax isn't the only thing that's tortured and strange. Take myvulture.com, an Internet company born and born-again, worth $1 million or $500, depending on whether you ask the CEO or his mother; or look at Joanie Caucus as the turnover in Washington casts her career into play, if not into midlife crisis; or consider J.J. and Zeke, whose pay-per-view, online wedding yields mucho buzz but zero bucks--just like the rest of the Net. Yes, it's a Dubya Dubya Dubya world. Doonesbury just downloads it.
G. B. Trudeau has been drawing his Pulitzer Prize-winning comic strip for more than forty years. In addition to cartooning, Trudeau has worked in theater, film, and television. He also has been a contributing columnist for the New York Times op-ed page and later an essayist for Time magazine. He is a fellow of the American Academy of Arts & Sciences. He lives in New York City with his wife, Jane Pauley. They have three grown children.