The War Within: One More Step at a Time (Doonesbury #27) (Paperback) 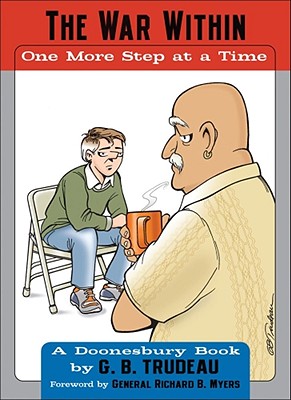 The War Within: One More Step at a Time (Doonesbury #27) (Paperback)

This is book number 27 in the Doonesbury series.

Your compassionate portrayal of Lieutenant B.D.'s recovery and struggle . . . has touched our Warrior family and opened the eyes of the rest of the world to the physical, emotional, and personal challenges our soldiers face."

The initial stages of B.D.'s recovery from losing a leg in Iraq were dramatically portrayed in The Long Road Home: One Step at a Time, but his healing journey was far from over. As this powerful sequel shows, the "war within" can be a long and lonely struggle, hardly the life of a "glamorous amputee" imagined by his daughter's jealous classmate. With his coaching job at Walden re-secured and the marathon PT sessions paying off, B.D.'s return to normalcy seems to be progressing well. But those who love him see alarming signs of trouble, namely anger and alcohol.

First there's the punching of an MP. Then there's the daily breakfast of beer, a subject not open for discussion even with a best-intentioned friend like Mike Doonesbury. And "the screaming at night isn't very Christmassy," Boopsie notes. As B.D. admits to his doctor, "I'd rather sleep with my weapon than my wife! How messed up is that?" Messed up enough that our wounded warrior forces himself to begin circling the local Vet Center, where he is gently and skillfully reeled in by a remarkable counselor and fellow Vietnam Vet named Elias. Their sessions together form an extraordinary and moving chronicle of catharsis and coming-to-terms. The words "Welcome home, soldier," are powerful and transformative, and B.D. is fortunate in finally getting to a place where he can hear them.
G. B. Trudeau has been drawing his Pulitzer Prize-winning comic strip for more than forty years. In addition to cartooning, Trudeau has worked in theater, film, and television. He also has been a contributing columnist for the New York Times op-ed page and later an essayist for Time magazine. He is a fellow of the American Academy of Arts & Sciences. He lives in New York City with his wife, Jane Pauley. They have three grown children.