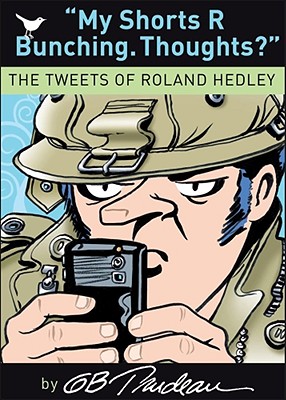 This is book number 30 in the Doonesbury series.

In March of 2009, Doonesbury's intrepid journalist Roland Burton Hedley, III, opened a Twitter account and began to tweet. A lot. Four weeks later, a sampling of his 140-character missives was published in The New Yorker to great acclaim, and his posts were featured in a one-on-one "tweet-off" in the Columbia Journalism Review. Rushed into print, this groundbreaking volume is the first book-length Twitter collection by a single author. With dozens of Doonesbury strips and over 500 tweets, it presents the best of Hedley's work -- frontline micro-blogging from the self-anointed dean of Washington journotwits.

Eight months into this project, author G.B. Trudeau can confirm that Twitter is a colossal sinkhole of time, but is gratified that he has found a way to monetize Roland's inane postings. (Follow Roland_Hedley.) When not writing comedy haiku on Twitter, Trudeau writes and draws the Pulitzer-prize-winning comic strip Doonesbury for 1100 newspapers worldwide, and lovingly curates his web presence at Doonesbury.com. He also hosts a milblog called The Sandbox.

"Just spotted colleague Terry Moran in hall. Could wave, but easier to tweet. Hey, dude." 10:49 AM Mar 18th from Tweetdeck

"Bumped into an old stalker of mine at Borders. She'd lost some weight and looked terrific, but I tweeted 911 anyway. Cops arrived from 3 states." 1:43 PM Mar7th from Blackberry

"I refuse to apologize for making time for my kid's ball games, so I usually end up not going." 9:13 AM May 4th from web

"Had close call watching MJ memorial service. They ended 'We are the World' before I could jimmy open my gun closet and blow my brains out." 12:33 PM Jul 7th from web

"While speaking last night, someone threw panties on stage. Or boxers. Whatever. Times like that, always ask myself: What would The Boss do?" 5:13 PM Mar 12th from web

"Accompanying HMMV patrol, used on-board computer to order Ab Rocket. And because I acted when I did, receiving second one absolutely free." 8:01 PM Apr 13th from Blackberry
G. B. Trudeau has been drawing his Pulitzer Prize-winning comic strip for more than forty years. In addition to cartooning, Trudeau has worked in theater, film, and television. He also has been a contributing columnist for the New York Times op-ed page and later an essayist for Time magazine. He is a fellow of the American Academy of Arts & Sciences. He lives in New York City with his wife, Jane Pauley. They have three grown children.