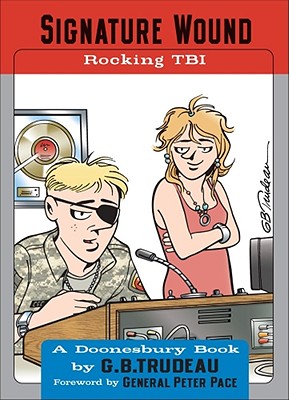 This is book number 32 in the Doonesbury series.

Signature Wound: Rocking TBI completes a trilogy of Doonesbury books that examines the impact of combat on American soldiers in Iraq.

A twist of fate brings B. D. to the bedside of SFC Leo Deluca (a.k.a. Toggle), a young HUMV driver and headbanger whose love of ear-bleed battle music had sonically distracted him enough to get his vehicle blown up. Missing an eye and suffering from aphasia, Toggle fights to recover from traumatic brain injury (TBI), a journey of recovery that brings out the best in B. D., his former commander. Toggle's tattooed, metalhead mom initially has reservations about his improbable Facebook romance with an MIT tech-head named Alex, but love blooms. As this engaging story unfolds, Toggle finds himself drawn toward a career in the recording industry, undaunted by the limitations of the New Normal that now defines his life.

Crafted with the same kind of insight, humor, and respect that prompted the Pentagon and the VA to host signings of the two previous books in the trilogy, Signature Wound is a perceptive and timely look at the contemporary soldier's experience.
G. B. Trudeau has been drawing his Pulitzer Prize-winning comic strip for more than forty years. In addition to cartooning, Trudeau has worked in theater, film, and television. He also has been a contributing columnist for the New York Times op-ed page and later an essayist for Time magazine. He is a fellow of the American Academy of Arts & Sciences. He lives in New York City with his wife, Jane Pauley. They have three grown children.