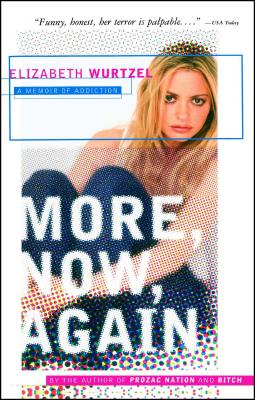 Elizabeth Wurtzel published her memoir of depression, Prozac Nation, to astonishing literary acclaim. A cultural phenomenon by age twenty-six, she had fame, money, respect—everything she had always wanted except that one, true thing: happiness.

For all of her professional success, Wurtzel felt like a failure. She had lost friends and lovers, every magazine job she'd held, and way too much weight. She couldn't write, and her second book was past due. But when her doctor prescribed Ritalin to help her focus-and boost the effects of her antidepressants—Wurtzel was spared. The Ritalin worked. And worked. The pills became her sugar...the sweetness in the days that have none. Soon she began grinding up the Ritalin and snorting it. Then came the cocaine, then more Ritalin, then more cocaine. Then I need more. I always need more. For all of my life I have needed more...

More, Now, Again is the brutally honest, often painful account of Wurtzel's descent into drug addiction. It is also a survival story: How Wurtzel managed to break free of her relationship with Ritalin and learned to love life, and herself, is at the heart of this ultimately uplifting memoir that no reader will soon forget.

Elizabeth Wurtzel is the author of the bestselling books Prozac Nation, Bitch, and More, Now, Again. She graduated from Harvard and her work has appeared in such publications as The New Yorker, New York, The Guardian, and The Oxford American. Wurtzel died in 2020 at the age of fifty-two.

Will Blythe Elle More, Now, Again (has) the frothy pleasures of a Jacqueline Susann novel as written by a spiky Harvard girl.

Kirkus Reviews Generational spokesperson Wurtzel pens a...moving account of her battle with drug addiction...a wake-up call about the abusive potential of Ritalin -- and a searing account of a long, deadly dalliance with destruction.