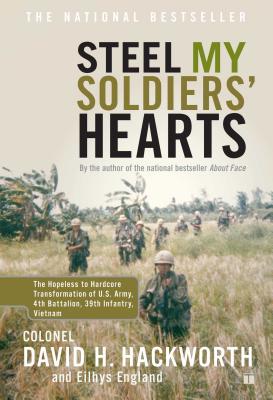 In January 1969, one of the most promising young lieutenant colonels the US Army had ever seen touched down in Vietnam for his second tour of duty, which would turn out to be his most daring and legendary.

David H. Hackworth had just completed the writing of a tactical handbook for the Pentagon, and now he had been ordered to put his counterguerilla-fighting theories into action. He was given the morale-drained 4/39th—a battalion of poorly led draftees suffering the Army's highest casualty rate and considered its worst fighting battalion. Hackworth's hard-nosed, inventive and inspired leadership quickly turned the 4/39th into Vietnam's valiant and ferocious Hardcore Recondos.

Drawing on interviews with soldiers from the Hardcore Battalion conducted over the past decade by his partner and coauthor, Eilhys England, Hackworth takes readers along on their sniper missions, ambush actions, helicopter strikes and inside the quagmire of command politics. With Steel My Soldiers' Hearts, Hackworth places the brotherhood of the 4/39th into the pantheon of our nation's most heroic warriors.

Colonel David H. Hackworth served in the military for twenty-five years and received 110 medals for his service. He is the author of About Face, Hazardous Duty, The Price of Honor, and Steel My Soldiers’ Hearts. He died in 2005.

Harold G. Moore Lieutenant General (U.S. Army, Ret.), coauthor of We Were Soldiers Once...and Young A riveting, candid and hard-hitting combat narrative by one of the top few brilliant battlefield leaders in the history of the U.S. Army. Outstanding!

The Philadelphia Inquirer [Hackworth is] perhaps the best military leader this country has had since Patton.

Frederick W. Smith chairman, president and chief executive officer, FedEx Corporation Col. David Hackworth is a national treasure....If you are interested in leadership, character, values and commitment to mission, you need to read this book.