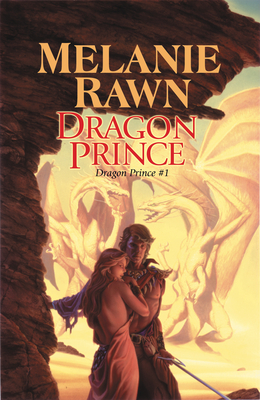 This is book number 1 in the Dragon Prince series.

First in the bestselling Dragon Prince series, explore a lush epic fantasy world replete with winged beasts, power games of magical treachery, and a realm of princedoms hovering on the brink of war • “Marvelous!”—Anne McCaffrey

When Rohan became the new prince of the Desert, ruler of the kingdom granted to his family for as long as the Long Sands spewed fire, he took the crown with two goals in mind. First and foremost, he sought to bring permanent peace to his world of divided princedoms. And, in a land where dragon-slaying was a proof of manhood, Rohan was the sole champion of the dragons, fighting desperately to preserve the last remaining lords of the sky and with them a secret which might be the salvation of his people....

Sioned, the Sunrunner witch who was fated by Fire to be Rohan’s bride, had mastered the magic of sunlight and moonglow, catching hints of a yet to be formed pattern which could irrevocably affect the destinies of Sunrunners and ordinary mortals alike. Yet caught in the machinations of the Lady of Goddess Keep, and of Prince Rohan and his sworn enemy, the treacherously cunning High Prince, could Sioned alter this crucial pattern to protect her lord from the menace of a war that threatened to set the land ablaze?

Melanie Rawn, the author of DAW’s bestselling Dragon Prince trilogy—Dragon Prince, The Star Scroll, and Sunrunner’s Fire—is a second-generation Californian who, after graduating from Scripps College with a B.A. in history, worked as a teacher and editor while writing her first two novels. She lives in a small town outside Los Angeles and keeps cacti as pets. She can be found at melanierawn.com.