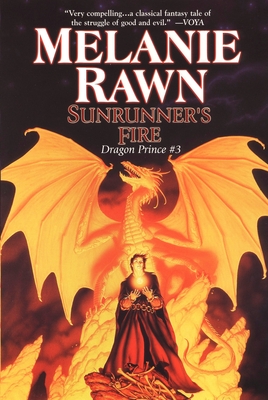 This is book number 3 in the Dragon Prince series.

Third in the bestselling Dragon Prince series returns to a lush epic fantasy world replete with winged beasts, power games of magical treachery, and a realm of princedoms hovering on the brink of war • “Marvelous!”—Anne McCaffrey

It began with the discovery of the star scroll—the last repository of forgotten spells of sorcery, the only surviving record of the ancient foe who in times past had nearly destroyed the Sunrunners and their magic. Now, as Andry, the new Sunrunner Lord of Goddess Keep, begins to master this potentially deadly knowledge, while Pol, son of High Prince Rohan, seeks to touch the minds of dragons, the long-vanquished enemy is mobilizing to strike again, drawing on forbidden lore to play an ever-shifting game of treachery and betrayal—and secretly infiltrating even the most strongly protected of citadels.

And soon, Pol, Andry, Rohan, his Sunrunner wife Sioned, and all whom they hold dear will find it hard to tell friend from foe as spell wars threaten the devastate the land—and dragons soar the skies, inexorably lured by magic’s fiery call….

Melanie Rawn, the author of DAW’s bestselling Dragon Prince trilogy—Dragon Prince, The Star Scroll, and Sunrunner’s Fire—is a second-generation Californian who, after graduating from Scripps College with a B.A. in history, worked as a teacher and editor while writing her first two novels. She lives in Flagstaff, Arizona, where she keeps cacti as pets. She can be found at melanierawn.com and on Facebook.