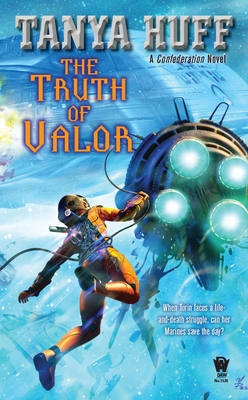 This is book number 5 in the Valor Novel series.

Gunnery Sergeant Torin Kerr was the very model of a Confederation Marine. She’d survived more deadly encounters than anyone in the Corps. No one who’d ever served with her could imagine her walking away from the Corps. But that was before Torin had learned the truth about the war the Confederation was fighting…before she’d been declared dead and had spent time in a prison that shouldn’t exist....

It was Salvage Operator Craig Ryder who had refused to believe Torin was dead. Craig who found and rescued Torin. And so, when her mission was complete, Torin resigned from the Marines to start a new life with Craig aboard his tiny salvage ship, the Promise.

But civilian life was a lot rougher than Torin had imagined. The salvage operators were losing cargo and lives to pirates. Because salvagers were an independent lot unwilling to turn to the OutSector Wardens for help, no one in authority seemed to take their ever-increasing threat seriously.

Then, on their first real run together, pirates attacked the Promise, kidnapping Craig and leaving Torin to die. But leaving Torin behind to die was never a good strategy. Against all odds, she survived, and certain—despite no evidence to prove her correct—that Craig was still alive, she decided to mount a rescue mission. When Craig’s salvager friends refused to join her, Torin had no choice but to call in the Marines—some very special Marines.

Then she discovered why the pirates had been trying to kidnap salvagers. And suddenly Torin’s mission expanded from saving Craig to stopping the pirates from changing the balance of power in known space....