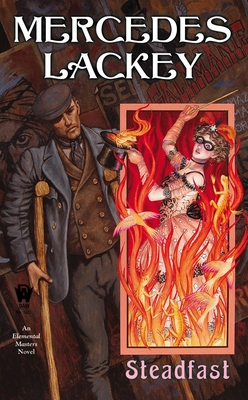 By Mercedes Lackey
$8.99
Email or call for price.

This is book number 8 in the Elemental Masters series.

Katie Langford had been part of her family’s acrobatic troupe working in a small traveling circus—until a terrible fire killed her parents. Years later, still with the circus but stuck in an abusive marriage, Katie fled from her increasingly dangerous husband to Brighton. As a seaside resort town, Brighton’s music halls meant no circus needed to visit. It was as safe a place as she could find.

Lionel Hawkins was a professional magician who had a permanent job at the Palace Music Hall in Brighton. His shows never failed to enchant the ever-changing crowds, for his magic was more than just tricks. Lionel was an Air Magician, and he wasn’t the only one at the Palace who had magical abilities. Jack Prescott, the Palace doorman who had lost a leg in the Boer Wars, had preternatural awareness of all flame, which had saved the Palace from burning on more than one occasion.

When Katie answered the Palace’s call for a new assistant with stage experience, it seemed like all her problems were solved. But it soon became clear that Katie was a Fire Magician like Jack and that something had blocked Katie’s access to her own abilities—a dangerous situation for everyone around her. Fire, the most volatile of all the elements, was a power that could easily turn deadly when fueled by strong emotion. And Lionel and Jack could tell that Katie was hiding something. Something that frightened her. Something that could set their whole world ablaze if they couldn’t help her master her Element in time.